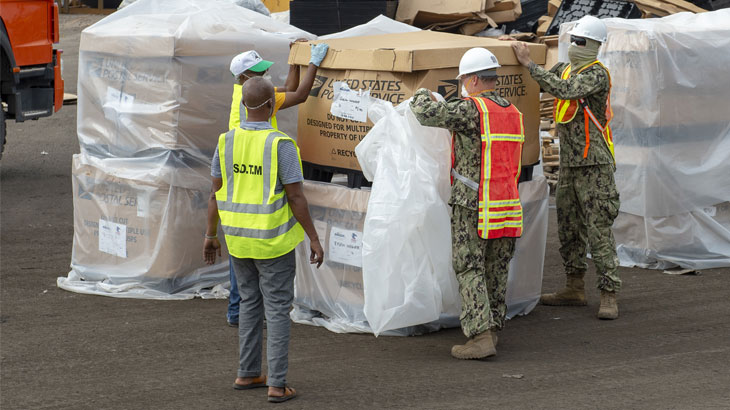 Camp Lemonnier, a U.S. base in the east African country of Djibouti, is being used by U.S. Navy cargo planes to transport mail to bases in Europe. Shown are Navy and host nation personnel loading mail at the port of Djibouti. Photo courtesy of the U.S. Na

The same problem that has forced the United States Postal Service to use ships to get mail to Europe has hit the military.

Mail and parcels headed for military personnel stationed in Europe and the Mediterranean couldn’t get overseas because of the cancellation of many trans-Atlantic commercial aircraft flights due to the coronavirus COVID-19 pandemic.

The military responded by moving an estimated 40,000 pounds of delayed mail from Chicago to Bahrain and then to a U.S. base in the east African country of Djibouti.

The USPS arraigned charter mail flights to Bahrain and then to Djibouti.

From there the military flew mail to bases in Europe in cargo planes.

Use of this backdoor approach was a success moving what Stars and Stripes, a U.S. military publication, described as a “mountain of mail.”

The Navy had been making twice-weekly flights to Camp Lemonnier, a U.S. base in Djibouti, bringing medical supplies from Europe.

Those flights, dubbed the “CLDJ Express,” were designated to also carry the delayed mail to Europe. CLDJ is short for Camp Lemonnier, Djibouti.

It took from March 30 to April 25, but a Navy team cleared almost 200 mail pallets through Djibouti customs and on to C-40 cargo planes for delivery, the newspaper said.

The mail backlog was pretty much “cleaned out” Rear Adm. Yancy B. Lindsey said, adding that some packages were still at post offices.

“Go to the post office and get your mail,” the admiral said in a video town hall to service members under his command. “They don’t want to work around this stuff anymore.”