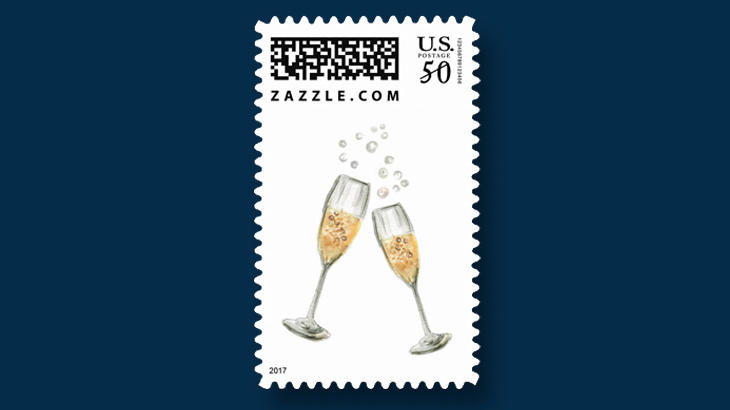 A mock-up from the Zazzle.com personalized postage provider of one of its design offerings showing toasting champagne flutes. Under new rules, designs featuring alcohol would not be allowed except in situations in certain social contexts, such as weddings

After a year of study, the United States Postal Service has announced what images and subject matter it will allow on computer-generated postage created by Stamps.com, Zazzle.com and other companies.

Some mailers are not happy with the Postal Service’s final proposal, printed in the Federal Register on Dec. 19.

“A lump of coal,” decried the Alliance of Nonprofit Mailers.

The organization complained the new rules will allow commercial mailers to use almost any commercial display of their products but will discourage nonprofits from expressing their views in the form of postage.

In a Dec. 19 report, the Alliance said, “Apparently, its attorneys are worried that some nonprofit subjects could be ‘threats to the Postal Service brand,’ and it would be ‘impermissible viewpoint discrimination, which would endanger the whole program.’”

What types of images are allowed on the computer-generated postage have already prompted lawsuits that challenge the refusal to allow some images as a violation of free speech rights granted by the Constitution.

But the Postal Service has held fast to its proposed ban on political advertising on postage.

The rules ban “any depiction of political, religious, violent or sexual content.”

Postal lawyers maintain that any provider of computer-generated postage must be careful to separate their products, called customized postage, from postage stamps.

The Postal Service also rejected concerns voiced by Stamps.com that it might be required to change its name or trademarks because of the new rules.

What troubled the Alliance most was the deference the Postal Service paid to commercial organizations, compared to nonprofits, which were placed under a “social” category.

“Commercial” was defined by the USPS as a “means intended for no purpose other than the sale of goods or services in commerce.”

What is specifically banned?

“(i) Any non-incidental depiction of alcohol, tobacco, gambling, or firearms or other weapons;

“(ii) Any depiction of controlled substances, including but not limited to marijuana,

“(iii) Any depiction of political, religious, violent or sexual content; or

“(iv) Any depiction of subject matter prohibited for display under U.S. law.”

The rules also ban use of logos of beer and alcoholic beverages.

“Although allowing incidental depictions of alcohol in a commercial or social context is acceptable under the final rules, allowing the non-incidental display of logos promoting alcoholic beverage sales creates more brand risks, and arguably opens other commercial categories that the Postal Service may be compelled to accept by First Amendment principles, e.g., logos promoting tobacco, weapons, or gambling enterprises.”

The rules rejected the Alliance’s complaint of preference to commercial firms, saying that nonprofits would be allowed the same freedom to purchase computer-generated postage as would any mailer.

Both Stamps.com and Zazzle had voiced concerns about the initial USPS proposal on images. Neither responded to Linn’s when asked about their views on the final regulations.