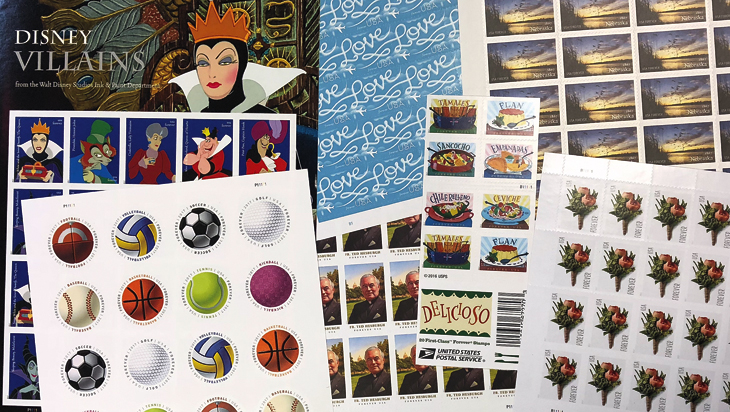 A selection of United States stamp panes issued in 2017. Stamp agents overseas recently learned that their contracts with the U.S. Postal Service to sell U.S. new issues will not be renewed. The Postal Service is allowing the contracts to expire as of Dec

The United States Postal Service has decided to end sales of U.S. stamps through a network of more than a dozen overseas agents. The agents receive a discount, a percentage of face in the low double digits, but were obligated to sell the U.S. stamps at face value as converted into euros plus value-added tax (VAT).

News of the change came from Gunter Sieger, one of the USPS agents in Germany whose stamp firm has sold U.S. stamps on consignment for more than 35 years. Sieger was shocked by the termination of his sales agreement effective Dec. 31.

The Postal Service confirmed the decision in a two-paragraph statement issued Nov. 30.

The statement said the “international dealer contracts were not ‘cancelled,’ but would be allowed to expire on Dec. 31.”

The statement did not explain how the Postal Service plans to replace the sales agents, but an official of Stamp Fulfillment Services had told Sieger that dealers and other international customers could purchase stamps directly from the Postal Service or eBay.

In an email dated Nov. 27 and supplied by Sieger, a USPS contracting officer said: “The decision to discontinue the international stamp program was not made by an individual, rather by an entire business unit of the USPS.

“Constant changes in our business model are influenced by changing market forces, and this decision was made to correlate with future business plans of the USPS,” said Carlos A. Vilches, a contracting officer in Aurora, Colo.

That email did not explain what the future plans were.

When Sieger protested, Dee Nelson, a philatelic program analyst in Kansas City told him in an email that “you and any other international customer can buy stamps directly from us outside of the consignment program, as well as purchasing them through our store on eBay.

“I understand the feeling of uncertainty, but be assured that we support philatelic customers, both domestic and international, and will continue to do so,” said Nelson, who works at the Stamp Fulfillment Services center.

Sieger received the notice that his contract was being terminated after he complained to the USPS about unexpected limitations in the new commemoratives shipped to his firm.

Nelson told him in a Sept. 7 email, “While we make every attempt to make ample quantities available to our international consignment partners, we first and foremost have the responsibility to our direct customers.

“By their nature our commemorative program is printed in limited quantities, and as you know, some stamp issues are more popular than others,” she added.

Sieger said in emails to the Postal Service that he was “completely surprised” by the USPS decision to eliminate the sales agents who sell stamps on consignment, much like many retail stores in the United States.

Selling stamps on consignment allows the agents to return any unsold U.S. stamp for credit. If dealers buy the stamps directly from the USPS, they will have to put up cash for them and will not have the right to return the stamps for cash, a major disadvantage.

“We worked for USPS with great enthusiasm,” Sieger said in one email.

“We spend very big amounts of our own money on marketing and advertising your stamps and saw our company not only as a partner in Germany, but also as a friend of American philately.”

He warned the official that “the demand for U.S. stamps will not disappear” after what he said was “the surprising USPS decision.”

The decision to eliminate the overseas sales agents is the second recent decision the USPS has made affecting sales to foreign customers.

In an Aug. 18 statement to Linn’s, it said “The Postal Service — not Stamp Fulfillment Service — has instituted a policy of no longer accepting foreign credit cards in order to prevent fraud and protect our assets.”

The USPS offered no further explanation of what had prompted the credit card change.