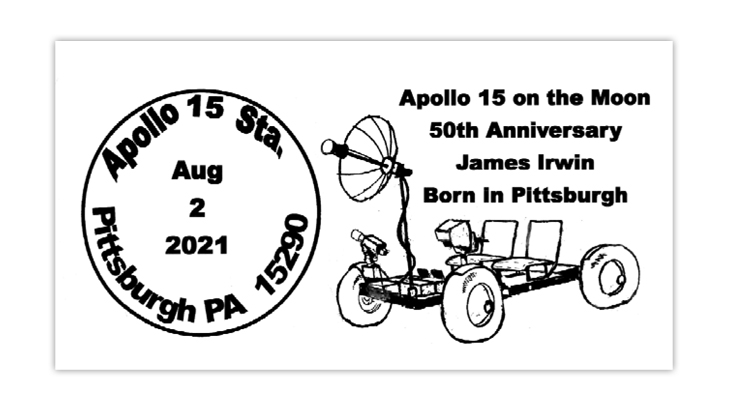 A Pittsburgh, Pa., pictorial postmark is available for the 50th anniversary of the Apollo 15 mission, the fourth of the lunar missions to land astronauts on the moon and the first to use the lunar roving vehicle.

The mission was considered a success, as it achieved all of its objectives and then some.

Apollo 15 headed back to Earth on Aug. 2, 1971. Also on that date, the Postal Service issued a pair of 8¢ Space Achievement Decade stamps (Scott 1435b) featuring a lunar rover.

Linn’s Astrophilately columnist, Chuck Vukotich, explained that just before Irwin and Scott left the moon’s surface, they canceled an envelope with two of the aforementioned stamps on it. The cancellation read: “UNITED STATES/ON THE MOON/AUG. 2 1971/FIRST DAY OF ISSUE.” That cover now resides in the Smithsonian National Postal Museum in Washington, D.C.

Vukotich organized the details for the postmark pictured here, obtaining permission from the Irwin family and designing the artwork himself.