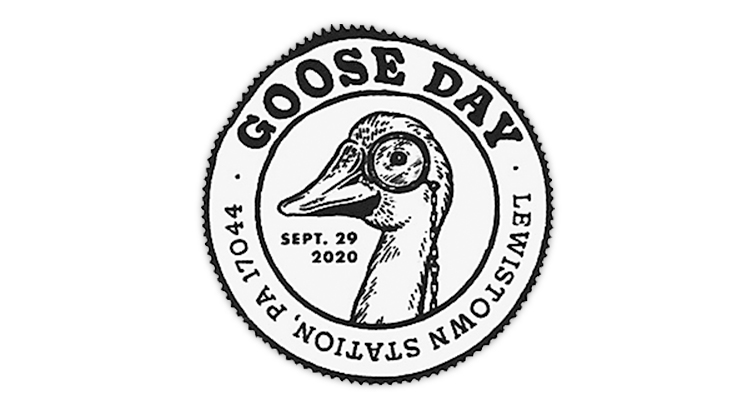 When I saw the Lewistown, Pa., postmark pictured here, I wanted to learn more about the fancy, monocle-wearing bird. Turns out, it represents a legend that says eating goose on Sept. 29 brings prosperity for the year.

In a tradition in Britain and Ireland that began in the Middle Ages, Sept. 29 was one of four days in the year when rents were paid, contracts settled and help was hired. The four days correspond with Christian holidays; Sept. 29 with Michaelmas, the feast day of St. Michael.

There are varying accounts of how a goose became associated with Michaelmas.

The date coincided with harvest, so some believe it came from an ancient rite of sacrificing a bird to increase the fertility of next year’s crops. Others say the goose was used to pay rent. Queen Elizabeth I was said to be eating goose on Sept. 29, 1588, when she learned of the Spanish Armada defeat; she was elated and declared goose should be eaten every Sept. 29.

According to the Juniata River Valley Chamber of Commerce, the tradition’s Pennsylvania roots began in 1786 when Dutchman Andrew Pontius settled in the area to farm and hired an Englishman named Archibald Hunter, who insisted they settle their accounts on Sept. 29. On that day, Hunter appeared at Pontius’ door to pay rent “with accounts under one arm and a goose under the other.”

As Lewistown celebrates Goose Day each year, local restaurants add goose dinners to their menus and a plethora of events are held.