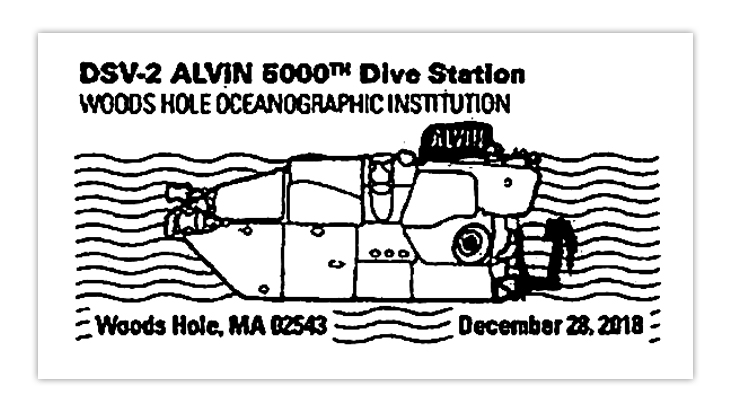 A Dec. 28 postmark commemorates the 5,000th dive of the submersible research vessel Alvin (SDV 2), which is owned by the United States Navy and has been operated for more than 50 years by the Woods Hole Oceanographic Institution.

The postmark for the Woods Hole, Mass., post office, is being fulfilled through Boston.

The Woods Hole institution provides an online history of Alvin at www.whoi.edu. The craft was built by General Mills beginning in 1962 and undertook its first dive in 1964. Its 1,000th dive took place at the Galapagos Rift in January 1980, and CBS News anchor Walter Cronkite was on board for the 1,211th dive.

The craft was used to photograph the wreck of the RMS Titanic in 1986.

Details about the Alvin submersible were featured in the Dec. 31 Linn’s on page 22, in a report about an article by Edwin J. Hayes Jr. in the December issue of U.S.C.S. Log.

The postmark design shows the versatile vehicle underneath the waves.

To obtain this postmark, address requests to: