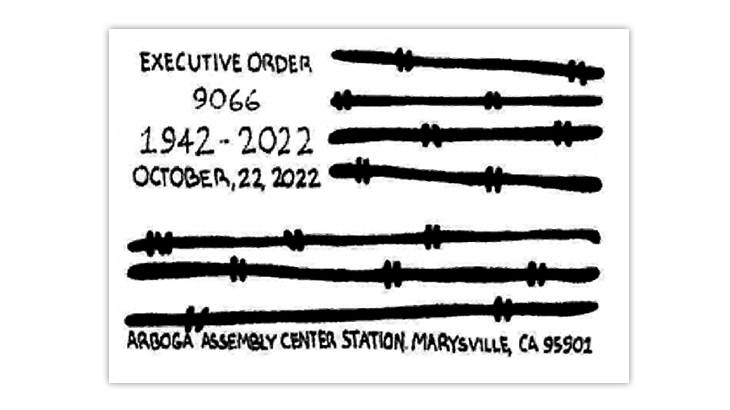 This Oct. 22 cancel honors Americans of Japanese descent who were forced to leave their homes during World War II.

It has been 80 years since Executive Order 9066 signed by President Franklin D. Roosevelt set into motion the removal of Americans of Japanese ancestry from their homes to temporary detention camps.

One of the sites where 2,465 people were sent beginning on March 30, 1942, was the Marysville Assembly Center located 8 miles south of Marysville, Calif.

The postmark shown here was issued for the Oct. 22 rededication of that location, also known as the Arboga Assembly Center memorial site, to honor those who were incarcerated.

“They were our neighbors; men, women, and children of all ages whose only ‘crime’ was to be born of Asian heritage,” the Yuba Sutter Arts event website said.

Many groups came together to preserve the site, including the Marysville Chapter of the Japanese American Citizens League, Marysville Unified School District, Yuba Sutter Arts and Culture and Yuba Sutter Arts Council, working with a grant from the State Library through the California Civil Liberties Public Education program.

The Arboga Assembly Center is designated as a California State Historical Landmark.