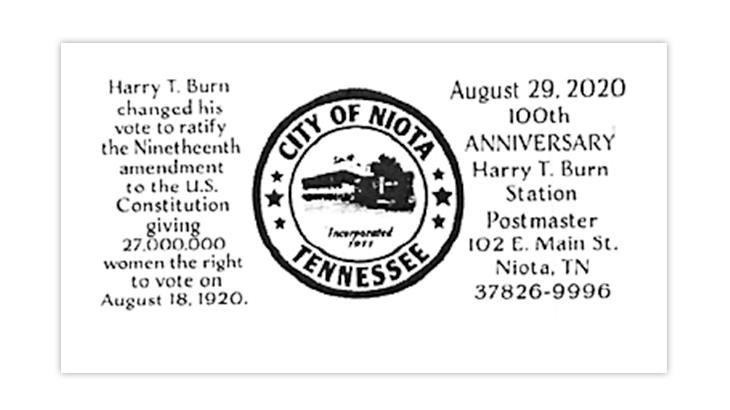 This pictorial postmark is a celebration of Harry T. Burn’s remarkable move to change his vote, thereby tipping the scales in favor of women’s suffrage in the United States. 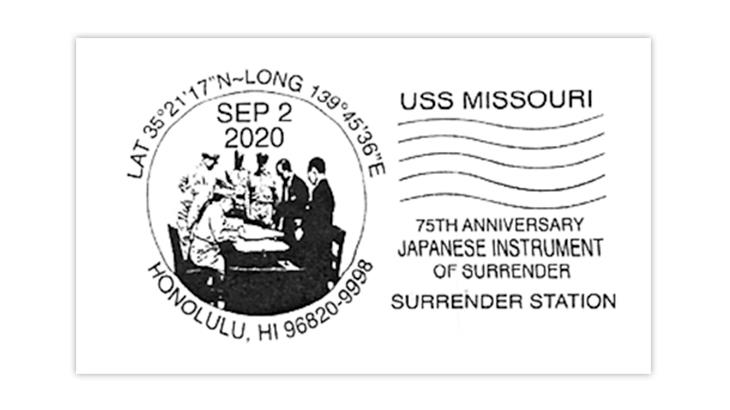 The signing of the instrument of surrender that ended World War II is depicted on this Sept. 2 postmark.
Previous
Next

The Niota, Tenn. pictorial postmark shown nearby tells the story of the single vote that ratified the 19th Amendment of the United States Constitution, granting women the right to vote 100 years ago.

It was the summer of 1920, and the measure had been approved by 35 states — one state short of the required 36. The decision was in the hands of Tennessee’s House of Representatives, where it seemed to be deadlocked in a tie.

Harry T. Burn, the youngest member of Tennessee’s legislature, was planning to cast his vote against the amendment until he received a letter from his mother urging him to reconsider.

On Aug. 18, 1920, it was time for the legislators to cast their votes. According to History.com, “Still sporting his red boutonniere [symbolizing opposition to the movement] but clutching his mother’s letter, Burn said ‘aye’ so quickly that it took his fellow legislators a few moments to register his unexpected response.”

This reversal outraged the anti-suffragists in his community, but the next day he spoke in the assembly and stood by his actions.

“I know that a mother’s advice is always safest for her boy to follow, and my mother wanted me to vote for ratification,” he said.

A second postmark shown nearby commemorates the 75th anniversary of the day Japanese representatives signed the instrument of surrender on board the USS Missouri, effectively ending World War II.

To obtain these postmarks, address your request to: