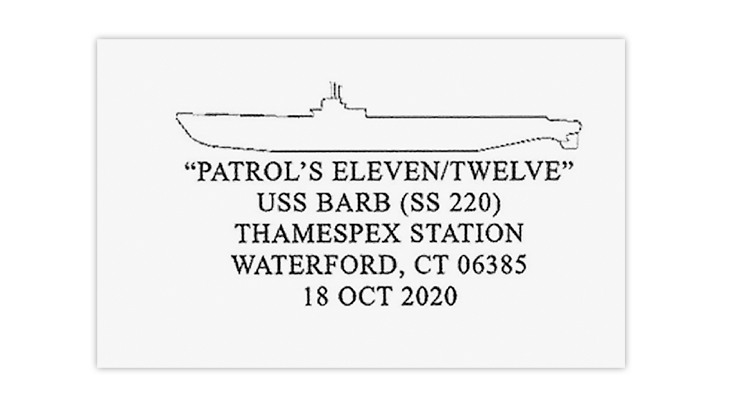 The USS Barb (SS 220), a submarine with an extraordinary World War II record, is lauded on the Oct. 18 postmark shown here.

Named after the ray-finned Barbus fish, the submarine and its crew earned many accolades for service, including the Presidential Unit Citation, and is credited with sinking the third greatest tonnage of Japanese shipping during WWII.

The postmark mentions the ship’s noteworthy 11th and 12th patrols. During the 11th patrol, the Barb sank four Japanese merchant ships and numerous small craft off the east coast of China.

On its 12th and final patrol, the Barb fired rocket launchers against Japanese-held towns along the Sea of Okhotsk, and its crew members rowed ashore and planted explosives that later destroyed a Japanese train.

The Waterford, Conn., postmark was supposed to be the show cancel for the Thames Stamp Club’s annual Thamespex stamp show, an event that was canceled because of the COVID-19 pandemic.