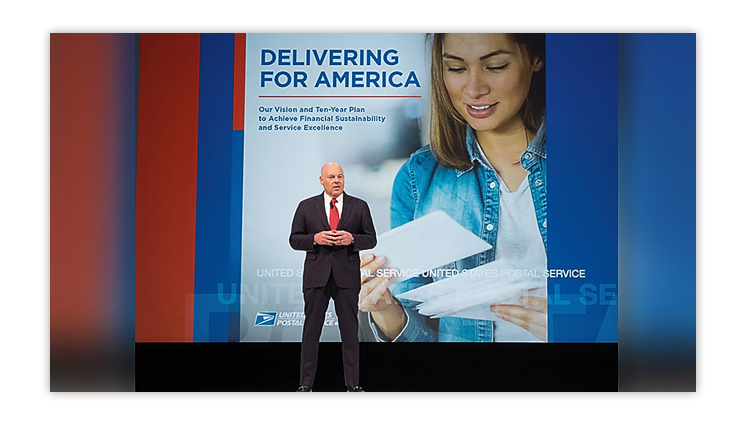 Postmaster General Louis DeJoy delivered the keynote address at the May 16 National Postal Forum, where he said he was hired to lead and transform the Postal Service.

With a majority of members appointed by President Joe Biden now sitting on the United States Postal Service’s board of governors, critics of Postmaster General Louis DeJoy are saying it’s time for the 75th postal chief to depart Washington, D.C.

“The first order of business for these new board members should be at long last removing Louis DeJoy from authority,” declared Rep. Bill Pascrell, D-N.J., who claims to be the first lawmaker to call for DeJoy’s dismissal.

But, as he has in his first two years in office, DeJoy is showing no signs of quitting.

If anything, what he is saying suggests that he is ignoring what he calls “the noise.”

“There’s nothing I’m going to do about this noise, right?” DeJoy told Eric Katz of Government Executive (a media company) April 12. “You just can’t stop it once it starts happening. Other than just keep moving forward, keep your eye on the ball,” DeJoy said.

Despite this resistance, DeJoy keeps pressing his controversial 10-year Delivering For America plan for reshaping what he has called the “frozen organization” that he inherited.

As DeJoy made clear in his keynote address at the National Postal Forum on May 16, his plan calls for much more with regard to the nation’s mail service.

“The board did not hire me, nor did I come here, to manage the Postal Service,” he said, stressing the word “manage.”

“I was hired to lead the Postal Service and transform it.”

DeJoy, who was best known as a Republican Party fundraiser when he was hired, already has implemented controversial plans that slow mail, call for more stamp price increases and place less mail on airplanes and more on trucks.

What now lies ahead are sweeping changes to the realign the agency’s mail-processing plants, he said.

“This is a massive effort that will touch almost 500 network mail processing locations, 10,000 delivery units, 1,000 transfer hubs and almost 100,000 carrier routes,” he told the postal forum in Phoenix.

The shake-up of the network will need to be carefully done, he conceded.

But he made clear in his National Postal Forum address that it will require more major changes ahead.

“Ridding ourselves of operational and organizational activities that are destructive to our performance requires careful execution,” he said.

DeJoy said he has found the current processing and transportation networks are “not good.”

“We process mail and packages in a complicated, illogical, redundant and inefficient way,” he said.

Moreover, he continued, “our facilities are in disrepair, lack adequate space and equipment and are not suitable to the implementation of standard operating practices and measurements.”

He predicted the agency will close a “multitude” of postal annexes that are adding extra costs and will create “multi-functional distribution centers” to handle incoming and outgoing mail.

Some of what DeJoy called “dormant facilities” might be redesigned.

Those changes might take years to fully implement, DeJoy acknowledged.

But he argued his vision is the way to return the USPS to prosperity.

“By executing on this plan, we will reverse $160 billion dollars of projected losses and avoid a government bailout,” he said, echoing arguments he made to fellow Republicans to endorse legislation to give the agency significant financial relief.

With his changes, DeJoy promised that “we will also generate $40 billion in cash to invest in desperately needed facilities, vehicles, technology and other infrastructure.”

What that will produce, according to DeJoy, is a more reliable Postal Service, one that he said the American public will admire and use.

But as DeJoy told Government Executive, he is not a quitter.

No charges brought against DeJoy for political giving