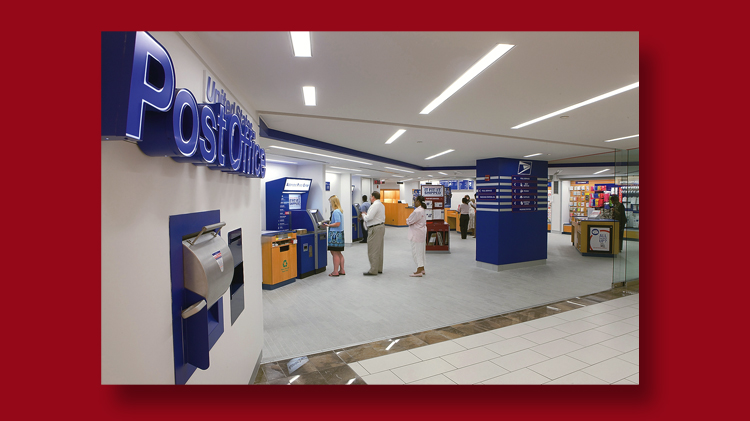 Lobby of a U.S. post office. Photo courtesy of the U.S. Postal Service.

President Donald Trump’s administration has called for privatizing the United States Postal Service, saying that the nation’s mail service has been crippled by a sharp decline in the volume of letters and cannot sustain its huge costs.

The proposal was contained in a White House plan for reshaping the federal bureaucracy. Called “Delivering Government Solutions in the 21st Century,” the plan was released June 21.

The proposal about the USPS comes as a task force convened by the president is considering what to recommend for the financially troubled agency’s future.

The blueprint for what that task force may suggest is probably something along the lines contained in the “Delivering Government Solutions in the 21st Century” plan.

“USPS can no longer support the obligations created by its enormous infrastructure and personnel requirements,” the paper said.

It suggested that the Postal Service should be restructured “to return it to a sustainable business model or prepare it for future conversion from a government agency into a privately-held corporation.”

Any such move would require approval from a Congress that has ignored years of complaints by postmasters general that the agency, which dates from the beginnings of the nation, needs drastic change to prosper.

Mark Diamondstein, president of the American Postal Workers Union, said the plan “delivered nothing but misinformation” and would cause postage rates to skyrocket and mail service to deteriorate.

Frederic Rolando, president of the National Association of Letter Carriers, said the White House paper shows that privatization is the task force’s goal.

“NALC will work tirelessly with other stakeholders and Congress to oppose this faulty privatization plan every step of the way to preserve this public institution…” he said.

A coalition of mailers also denounced the “draconian solution” the Trump administration had offered.

“The mere prospect of privatization will sow confusion, uncertainty and concern about maintaining mail and package delivery around the country, and stimulating still more volume and revenue loss when the major problem has been a drop off in mail,” said Art Sackler of the Coalition for a 21st Century Postal System.

“We can expect sparsely populated rural areas to be particularly hard hit in a privatized system and see their primary tie to the rest of the country degraded,” Sackler said.

Postmaster General Megan J. Brennan, who has resisted Trump’s demands for higher postage rates for Amazon parcels, issued a brief statement noting that her agency’s “consistent position” has been that “our flawed business model is the root cause of our financial instability.”

The Trump blueprint suggested there are other problems with the Postal Service, including “extremely high fixed costs” and “relatively generous employee benefits.”

Unlike any recent president, Trump has repeatedly attacked the Postal Service, focusing on Amazon’s discounted package rates and mandating a presidential task force to examine the agency’s finances.

The Trump plan acknowledged that package volume has been growing but said that this growth cannot be sustained because packages are not as profitable as letters for the Postal Service to deliver.

The president’s plan suggested that the Postal Service should follow the lead of European postal administrations that have privatized their operations.

“A privatized Postal Service would have a substantially lower cost structure, be able to adapt to changing customer needs and make business decisions free from political interference and have access to private capital markets to fund operational improvements without burdening taxpayers,” the plan said.

The Trump proposal acknowledged that the sale of the Postal Service would require “implementation of significant reforms prior to sale to show a possible path to profitability.”

Brennan said it will be Congress that must decide what is the “best path to financial sustainability.”

Gowdy did not mention the Trump plan to privatize the Postal Service in calling for the hearing.