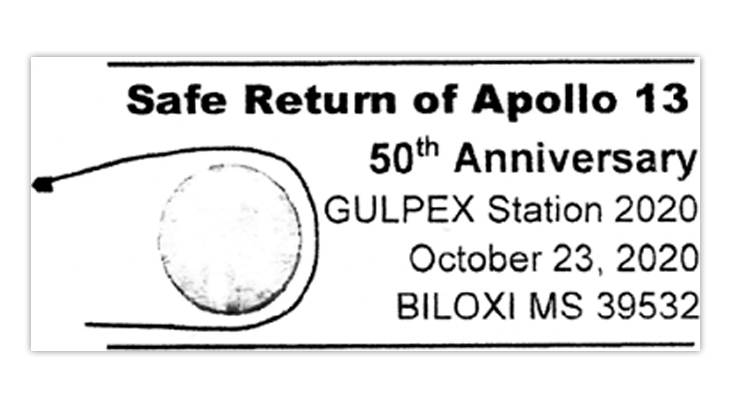 This Biloxi, Miss., postmark shows the path followed by Apollo 13 around the moon as it headed back to Earth.

Fifty years have passed since the safe return of Apollo 13 on April 17, 1970, and the postmark shown here commemorates the anniversary.

The design includes the moon and the spacecraft’s loop around it as the vessel headed back to Earth.

According to the Apollo 13 50th Anniversary Celebration program, “Apollo 13 launched from Kennedy Space Center on April 11, 1970, with the objective of landing in the Fra Mauro area, just north of the Fra Mauro crater on the lunar surface. The mission objective was aborted after a rupture of the service module oxygen tank; despite this catastrophe, the mission was considered a ‘successful failure’ because of the experience gained in rescuing the crew.”

Because of the COVID-19 pandemic, an April gala organized by the Astronaut Scholarship Foundation and its partners at the Kennedy Space Center was canceled and moved to a virtual celebration Oct. 9. The event included two of the Apollo 13 crew members, Jim Lovell and Fred Haise; Apollo 13 flight director Gerry Griffin; Apollo 16’s Charlie Duke; and many other special guests.

To learn more about the mission and anniversary celebration, go to the Astronaut Scholarship Foundation website.

The postmark hails from the Gulfpex 2020 Station. The Gulf Coast Stamp Club’s October 2020 show has been canceled, but the group is planning to host a 2021 event in the spring. The Biloxi, Miss., show brings in dealers from the Southeast United States.