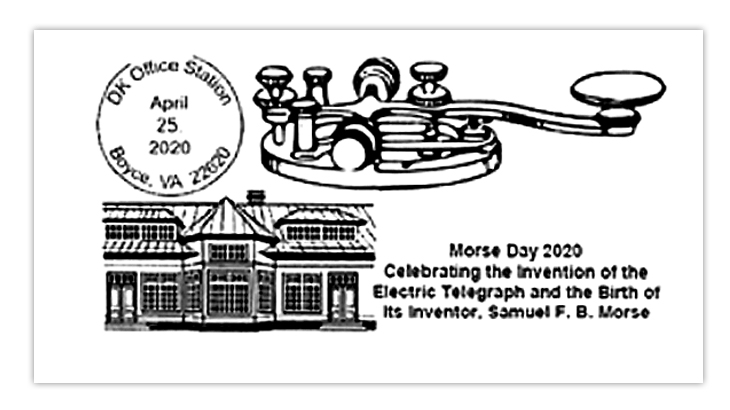 This April 27 postmark shows the front of the Boyce, Va., historic railway depot below an image of a telegraph.

April 27 is annual Morse Code Day, and there is a postmark available for the occasion.

According to Britannica.com, the invention began to take shape in 1832 when Morse, who was also a painter, was returning to America by ship after studying art in Europe.

It was on this voyage that Morse met inventor Charles Thomas Jackson, and the men discussed how an electronic impulse could be carried along a wire for long distances, according to Biography.com.

This piqued Morse’s interest, and he began sketching ideas and studying the work of American physicist Joseph Henry.

When Morse developed his telegraph prototype in 1836, others in Europe were also working on the invention.

“It is possible Morse knew about these, but no one had yet developed a fully operational device that could transmit over long distances,” the Biography website reports.

In 1838 Morse partnered with Alfred Vail, an inventor who helped develop the dots-and-dashes system for sending signals that would become known as Morse code. Vail also contributed financially to the project.

The pictorial cancel for Morse Day, shown nearby, is brought to collectors by the Railway Mail Service Library Foundation in Boyce, Va.