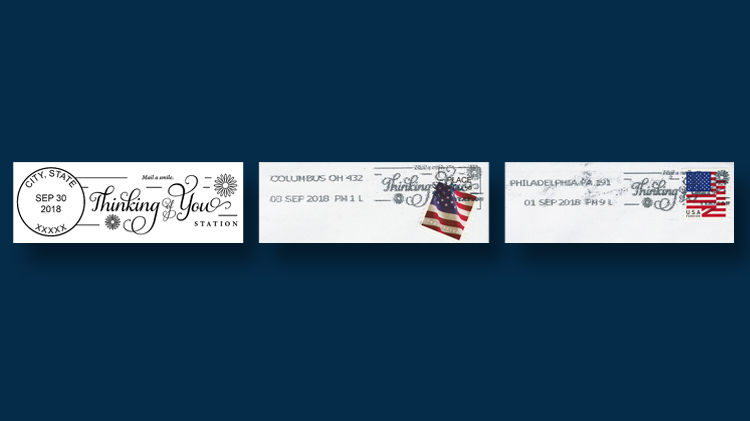 A “Thinking of You” postmark is being used at mail-processing plants nationwide in September. A mock-up of the postmark is shown at left, and examples of actual postmarks from Columbus, Ohio, Philadelphia, Pa., are shown at right.

The Greeting Card Association and the United States Postal Service partnered to create a “Thinking of You” postmark to be used at mail-processing plants nationwide during the month of September.

Although it is being used during the whole month, the postmark is for “Thinking of You Week,” Sept. 24-30.

According to the association, the week “seeks to create a broad awareness for the positive impact a greeting card can have on the recipient — especially when it is unexpected — and create a wave of more meaningful connections and caring throughout the year.”

This is a great concept and promotion, but unfortunately with terrible execution. It is my hope that the Postal Service will take the final product into consideration in creating future postmarks.

The mock-up of the new postmark design looks stunning, but the end product is a dreadful mess after it is applied to an envelope using ink-jet sprayed on technology. Although this technology has been around for more than a decade, sprayed-on postmarks have never looked good.

If this postmark is placed in the traditional manner, the fancy script design falls right on the stamp with only the word “Thinking” mostly legible.

The great message “Mail a smile” at the top of the postmark is so small it looks like a horizontal blob. The ornate flowers resemble black paint hitting a wall.

Ignoring the design doesn’t translate at all to a sprayed-on postmark. It would probably serve the design better if the city and date were placed at the right side of the postmark with the design on the left. That way the design would have a sporting chance of actually being read.