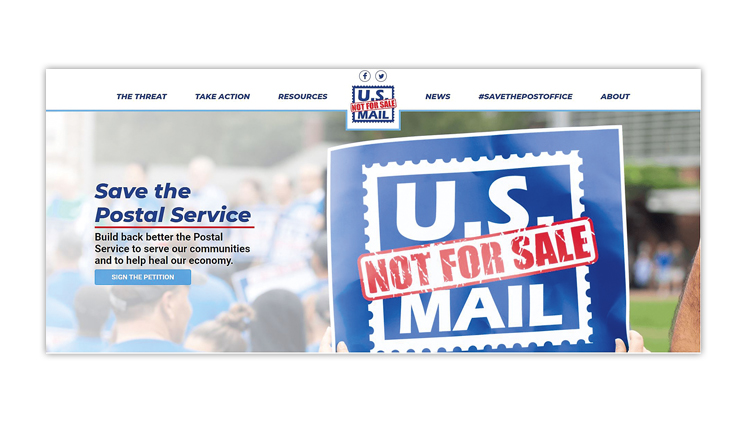 The American Postal Workers Union and the National Association of Letter Carriers recently launched U.S. Mail Not For Sale, an internet-based effort to “build back better the Postal Service to serve our communities and to help heal our economy.” Shown is

A coalition formed by two postal unions is pushing a campaign to get Joe Biden to quickly fill four vacant seats on the United States Postal Service’s board of governors after he becomes president Jan. 20.

The internet-based effort is led by U.S. Mail Not For Sale, a campaign organization formed by the American Postal Workers Union and the National Association of Letter Carriers, the two largest postal unions for the U.S. Postal Service.

The campaign launched a petition drive to President-elect Biden on its website, saying filling the vacancies on the postal board is essential to “build back better the Postal Service to serve our communities and to help heal our economy.”

The campaign calls on Biden “to quickly fill the four vacancies of the Postal Board of Governors with diverse and community-based members” who will “reject the postmaster general’s agenda of cutting service and slowing the mail.”

That is a direct challenge to Postmaster General Louis DeJoy, who was selected by a board composed of appointees of President Donald Trump.

The U.S. Mail Not For Sale campaign also calls for postal board nominees who are committed “to vibrant, public and universal postal services” to “emergency COVID-relief for USPS,” and “an agenda of expanding the role of the USPS in serving our communities.”

Trump has nominated all six members of the board of governors, but the term of one, Ron A. Bloom, expired Dec. 8, 2020, according to the USPS website.

That vacancy and three others that Trump never filled should give Biden the opportunity to fill four of the nine presidential appointments to the board.