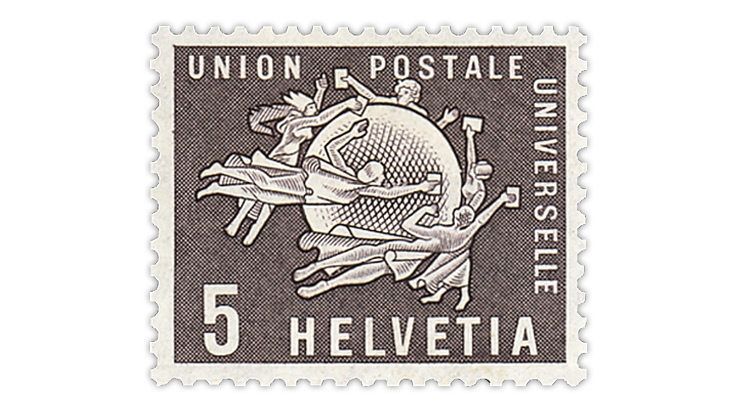 A 1957 Swiss 5-centime Official stamp for the International Bureau of the Universal Postal Union. A UPU conference on its remuneration systems will take place April 9.

The conference comes in the wake of last year’s announcement by President Donald J. Trump that the United States will withdraw from the UPU after 144 years of membership. The UPU is a United Nations specialized agency that facilitates the exchange of mail between countries worldwide.

The president’s decision has been attributed by many sources as a response to the current state of the UPU terminal dues system and a perception that certain international postage rates favor other countries, with China singled out most frequently.

Following the UPU’s Extraordinary Congress in early September 2018, the organization moved ahead with an examination of its remuneration system, distributing to its member nations a survey on market impacts of the system.

The survey, in part, requested responses to multiple statements about the terminal dues system that has been criticized by the United States.

In a Nov. 6, 2018, letter addressed to the designated operators of UPU member countries, Siva Somasundram, the UPU director of policy, regulation and markets, described an Integrated Remuneration Plan adopted at the 2018 Congress and said: "The [plan] identifies concrete areas in which better alignment, integration and rationalization of the remuneration systems can be achieved. An important element of this work aims at establishing the correct relationship between domestic tariffs and the cost of processing inbound international postal items."

According to the conference program, it will open with a session subtitled "On competition and universal access: balancing the scale."

The first session will address "an increasingly competitive cross-border delivery market," and the impact of that market on the UPU’s remuneration systems.

The concerns described seem to parallel those expressed by Trump in an Aug. 23, 2018, memorandum requesting "a system of fair and nondiscriminatory rates for goods that promotes unrestricted and undistorted competition."

A second session will address market drivers in cross-border postal services, leading to a concluding session that potentially could impact the situation criticized by the United States last year.

With the subtitle "Remuneration governance: the way forward," the concluding session is described as "a platform for an informed debate on where the UPU’s remuneration systems currently stand, and where they need to get to in order to satisfy the needs of the UPU’s multiple stakeholders." Options for reshaping the remuneration systems will be up for debate as well, according to the program.

It is unknown at this point whether any changes implemented as a result of the upcoming conference could affect the United States’ decision to leave the UPU. That departure is expected to take place as early as mid-October.