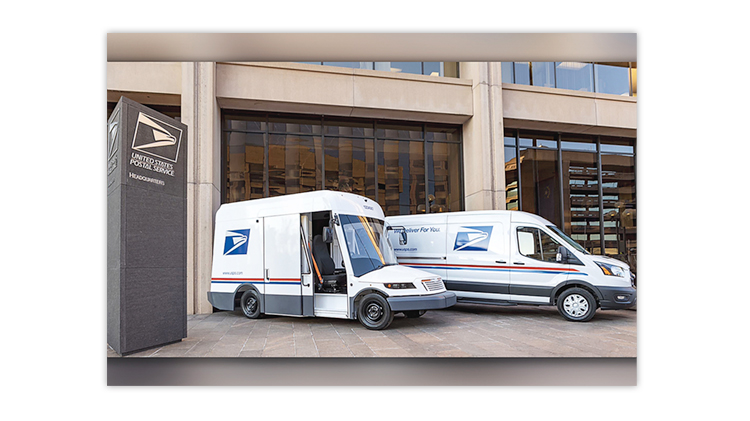 The United States Postal Service has committed to substantially increasing the percentage of electric mail delivery trucks that it will purchase in the coming years. Photo courtesy of the U.S. Postal Service.

The United States Postal Service announced Dec. 20 that it has agreed to boost its purchase of electric mail delivery trucks to “at least 75 percent” of its long-awaited Next Generation vehicles. The USPS promised it would likely have the largest electric vehicle fleet in the country.

The decision came after pressure from the Biden administration and Democrats in the House of Representatives who wanted the USPS truck purchase to presage the federal government’s commitment to move away from gasoline-powered vehicles.

The White House hailed the USPS action as “an historic $9.6 billion investment,” saying it will put the USPS “at the forefront of the clean transportation revolution.”

“This is a win for the Postal Service, the climate and the American people,” said Rep. Carolyn Maloney, D-N.Y., who had pushed for an all-electric postal truck fleet. Maloney is the chairwoman of the House Committee on Oversight and Reform.

Another leader on the truck issue, Rep. Gerald Connolly, D-Va., praised Biden and “so many of my colleagues in Congress for working with me to ensure that we never give up on the future of our beloved Postal Service.”

Postmaster General Louis DeJoy, whose initial plans called for only 10 percent of the new fleet to be powered by electricity, spoke warmly of the coming end to the agency’s aging gasoline-powered fleet, which is often plagued by fires and high maintenance costs.

“While most of the electric vehicle funding will continue to come from Postal Service revenues, we are grateful for the confidence that Congress and the [Biden] administration have placed in us to build and acquire what has the potential to become the largest electric vehicle fleet in the nation,” he said.

The plan outlined by DeJoy at a news conference in Washington, D.C., represents a boost in the percentage of electric vehicles that the Postal Service had said in July would likely be 50 percent of the new trucks.

After his initial announcement, DeJoy had pushed upward the percentage of electric trucks the USPS would buy as pressure mounted from environmental as well as political groups.

“Today’s announcement is enabled by the Postal Service’s overall network modernization, which allows for a more rapid deployment of EVs [electric vehicles], and its improving financial condition which includes $3 billion in congressional funding appropriated under the Inflation Reduction Act,” the USPS said in a news release.

The Postal Service promised it will continue to review its truck purchase plans “over shorter time periods” and in line with the expected growth of the commercial electric truck market.

The new truck plan calls for increasing the number of Next Generation trucks to a minimum of 60,000, at least 45,000 of which will be electric powered by 2028.

All of the Next Generation trucks to be delivered in 2026 and afterward are to be electric, the USPS said.

The Postal Service also said it expects to purchase an additional 21,000 electric vehicles through 2028. Some of those will be commercial off-the-shelf vehicles. Trucks purchased from 2026 to 2028 will be 100 percent electric, it said.

The agency also promised that it will continue to explore making 100 percent of its truck fleet electric.

Sen. Tom Carper, D-Del., said the truck issue is unsettled. “While today’s announcement represents real progress, I’m still not ready yet to call this job finished,” he said. “We must keep up the pressure until 100 percent of USPS’s delivery fleet runs on clean energy.”

The Postal Service has awarded Oshkosh Defense a contract to manufacture the trucks at a new plant it is opening in South Carolina.