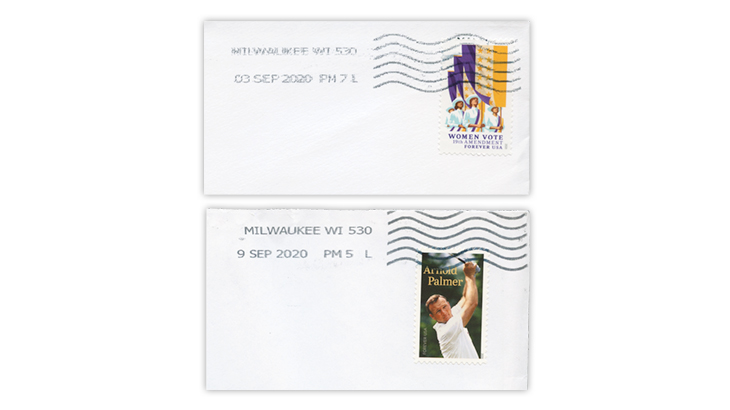 Two examples from Milwaukee, Wis., show sprayed-on postmarks before and after the conversion to new printing equipment that produces clearer and more legible cancellations.

I have written on multiple occasions about the illegibility of modern United States sprayed-on cancellations, especially as it relates to pictorial designs.

You might want to check your mail because many mail-processing plants around the nation began using a clearer cancellation in September, and a change in suppliers for the machines is responsible for the upgrade.

Previously there were three locations in Missouri, Texas and Virginia using the clearer postmark. Those locations are also known as test sites for postmarks.

I asked the U.S. Postal Service for confirmation that all mail-processing plants using sprayed-on cancels will be upgraded to this new postmark. I also asked why the change is being made.

“You are correct, the USPS has rolled out the new cancel printer with higher resolution and are on track to have all of the AFCS 200 machines updated by the end of September,” USPS spokesman Roy Betts said. “The previous print engine is no longer available from the supplier and we cannot get parts to rebuild our current stock. The new printer does have higher resolution which allows for more fidelity in the printed cancel mark.”

I am pleased with this upgrade, and the new sprayed-on cancellations look better on used stamps. And when the next pictorial machine cancel debuts, customers might actually be able to read the text this time.