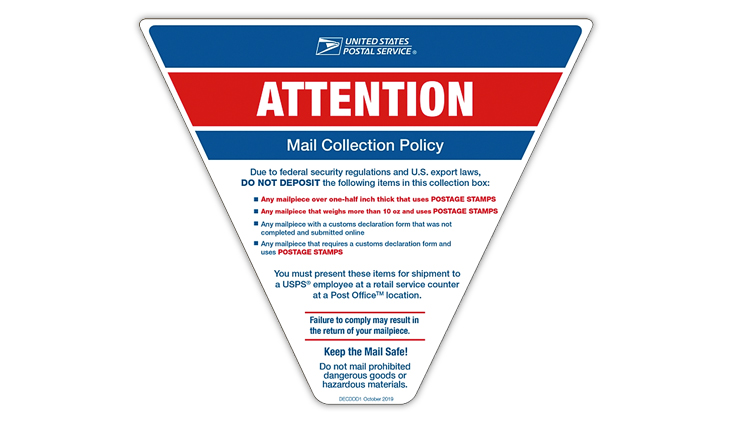 On Sept. 26, the United States Postal Service announced more restrictive rules governing the mailing of packages and letters franked with postage stamps. To alert USPS customers regarding the new regulations, a new warning label is being affixed to the na

The United States Postal Service has further tightened its rules governing the use of postage stamps on parcels and large letters.

The USPS announced in the Sept. 26 Postal Bulletin that effective Oct. 1 such letters and parcels must be presented in person at a retail postal counter.

“This modification was made out of an abundance of caution and to provide optimal security for Postal Service employees, customers, transportation networks, facilities and the U.S. mail,” the Postal Bulletin said in an announcement headlined “Delivery Operations.”

The announcement did not cite any specific instances in which use of stamps on mailpieces had provoked the new restrictions.

The new rules are the third modification of stamp restrictions that were first put in place in 1996 under the Aviation Mail Security Program.

Known informally as the Unabomber rules, the bans on stamped parcels grew out of the investigation into the bombs that Theodore J. Kaczynski mailed with stamps between 1978 and 1995.

Kaczynski often used more stamps than his parcels required. Kaczynski’s use of stamps provoked the requirement that called for parcels to be presented in person at a retail postal counter.

Initially the regulations said all stamped mailpieces weighing 16 ounces or more had to be presented in person to a retail clerk or letter carrier.

In 2007 that requirement was changed to reduce the weight allowed to 13 ounces.

They have also been told not to accept any stamped mailpieces that violate the new restrictions “even in face-to-face transactions.”

Any mailpieces that are discovered in the mail system are to be returned to the sender with a notice that these items must be presented at a retail postal counter to be mailed, the new rules said.

The new rules will require customers who use the self-service kiosks and place stamps on their parcels to present them at retail counters.

If the customers use a postage label generated by the machine instead of stamps, the parcels can be dropped into package slots at the post office.

New triangular labels are being placed on the nation’s more than 142,000 collection boxes. The label notes the new restrictions on use of postage stamps.

The label also adds a restriction on any mailpiece requiring a customs declaration that was not completed and filed online.

In addition, any such mailpiece with a customs declaration headed overseas that uses postage stamps must be presented at a retail counter.

“We certainly understand the security concerns outlined by the USPS with this rules change,” he said. “Hopefully, the trend does not lead to a prohibition of using postage stamps on packages.”

“Stamp collectors are among the most consistent and reliable customers of the USPS,” English said. “We encourage the USPS to better access this to recruit champions for positive changes to the mail system.”

“Recent events suggest uncancelled packages created confusion over whether the package was delivered by the USPS,” he said.

In response to a query from Linn’s on how the new rules will impact rural mail patrons, postal spokeswoman Kim From said: "Rural carriers will still be able to pick up unstamped packages with money for postage – in other words, packages requiring a retail transaction – from known customers, which are customers known to live or have a business on the carrier’s route.”

“Rural carriers will also still be restricted from accepting packages and mail pieces with stamps as postage that fall within the restrictions,” she said.