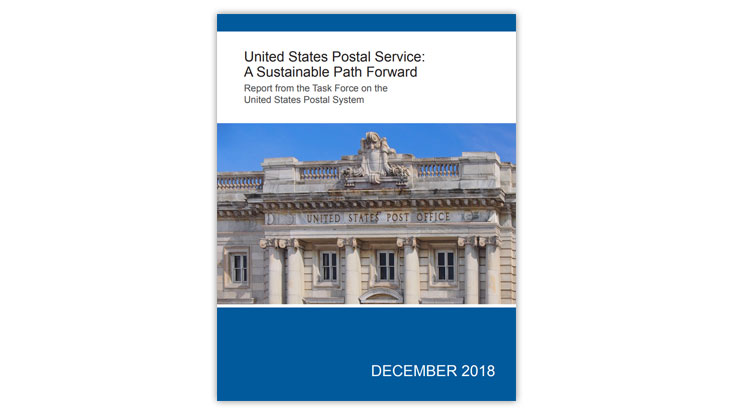 A news article on page 1 of the Dec. 24 Linn’s Stamp News described the report in detail.

In her comments, U.S. Postmaster General Megan J. Brennan did not address specifics of the report.

“The recommendations contained in the report should be evaluated together with legislative and regulatory reforms to address our urgent financial challenges,” Brennan said. “Reforms are necessary to enable the Postal Service to further reduce costs, grow revenue, compete more effectively, function with greater flexibility to adapt to a dynamic marketplace, and to prudently invest in our future.”

Brennan reiterated that the Postal Service’s mission is to provide prompt, reliable and efficient service to American businesses and consumers, and noted that the agency is currently contending with the busy holiday mailing season.

“While we continue to work with our stakeholders to address these important public policy matters, it’s important for our employees to focus on their day-to-day work, especially during peak season,” she said.

The National Association of Letter Carriers said the report “launches an all-out attack on the collective bargaining rights of postal employees — calling for the revocation of the right to negotiate wages by America’s postal unions.”

Mark Dimondstein, president of the American Postal Workers Union, described the report as “poorly conceived” in a Dec. 4 statement, saying its recommendations are based on myth and misinformation.

“This report calls for slashing universal service,” Dimondstein said. “Recommendations would slow down service, reduce delivery days and privatize large portions of the public Postal Service. Most of the report’s recommendations, if implemented, would hurt business and individuals alike.”

The International Mailers’ Advisory Group discussed the report in its December newsletter, observing that some of the task force’s recommendations, if enacted, “would lead to increased package prices, which would hit not just major online retailers but small businesses and consumers as well.”

The international mailers’ group also noted that the task force’s call to relax USPS price caps could cause concern, saying that “Commercial mailers of market-dominant products have long argued that the price cap is needed to force the Postal Service to control costs.”

The Alliance of Nonprofit Mailers flatly stated that its general reaction to the report is “quite negative,” pointing out that the Postal Service has generated operating profits in each of the latest six fiscal years.

“[This report] showed that only the miscalculated retiree health benefits charges have dragged the reported results into the red.”