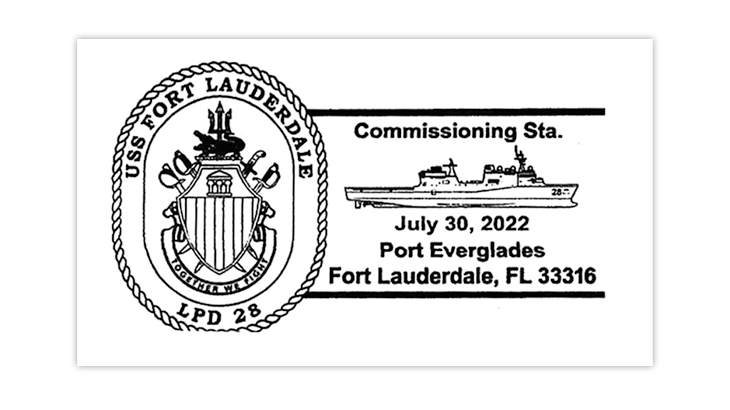 A postmark has been used for the commissioning of the United States Navy’s newest amphibious transport dock ship, USS Fort Lauderdale (LPD-28).

The pictorial postmark displays the ship’s coat of arms, which contains a shield, swords, an alligator and the “Together We Fight” motto.

The ship’s Facebook page shares the story behind the symbolism of this crest. The shield includes a fort with palm tree columns, a design taken from historical markers used throughout the city of Fort Lauderdale, Fla., to denote points of interest. The three palms represent the city’s original three forts.

A trident symbolizes the USS Fort Lauderdale’s ability to strike from the sea. The alligator stands for the “Gator Navy,” a class of Navy ships, including landing platform docks, designed to support Marine Corps operations.

The ceremony marked the official transition of the USS Fort Lauderdale into the fleet and ended a weeklong series of events celebrating the vessel and its namesake city.