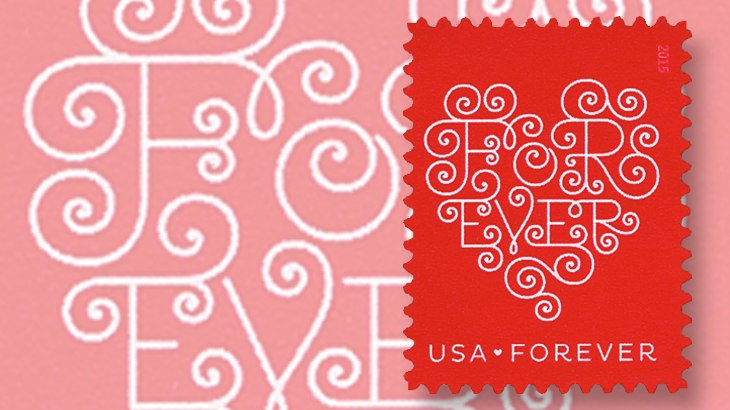 The Love stamps issued Jan. 22 were among a handful of U.S. issues that were included in the Stamps category on the Jeopardy! episode broadcast June 29.

The television game show Jeopardy! featured a Stamps category in its episode broadcast nationally June 29. It's at least the third time this year that stamps have appeared on the popular syndicated program. Episodes broadcast Feb. 17 and May 4 also featured stamps.

Following the familiar answer-and-question format of the show, the category in the regular Jeopardy segment contained five clues about United States postage stamps, and the contestants vied to respond to each with an appropriate question.

The $200 clue, for example, was "A 2015 stamp is a heart formed by the letters of this word, also used by the USPS to mean the lasting value of a stamp."

The correct response, given by contestant Amanda Mough, was "What is Forever?"

Only the Breast Cancer Research stamp and the Asher B. Durand stamp were pictured during the game.

The three contestants — Mough, Brandon Powell, and returning champion Ankoor Bagchi — all contributed at least one correct question in the category, but none of them came up with a response for the Durand stamp clue: "Asher Durand's Summer Afternoon is on a stamp celebrating the school of artists named for this New York river."

With no takers among the contestants, program host Alex Trebek informed them, "That would be the Hudson River."