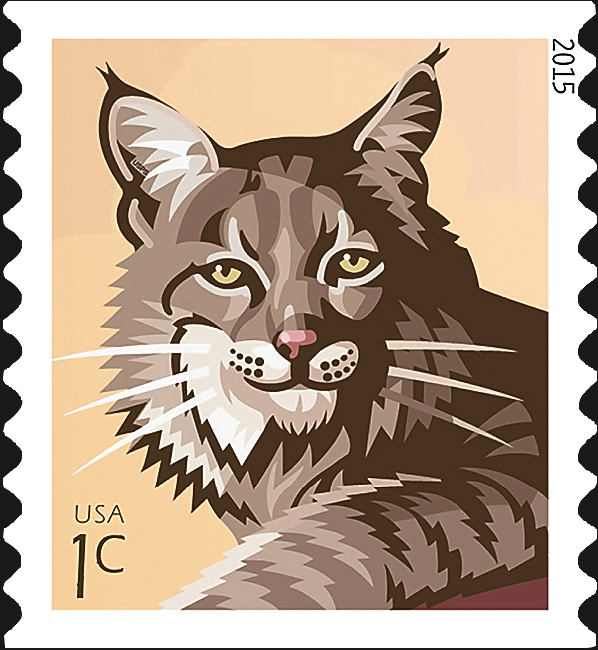 The third variety of the workhorse definitive will be issued in coils of 10,000, with a 2015 year date positioned in the upper right corner.

The newest United States definitive stamp has a familiar look to it.

Another variety with water-activated adhesive was printed by Banknote Corporation of America for Sennett Security Products and issued in 2013 in coils of 10,000 (Scott 4802)

The most apparent difference between each of these three varieties is the year date and its position in the design.

The 2012 year date on the 2012 coil appears in the right margin near the bottom of the stamp.

The 2015 year date on the new stamp is found in the right margin near the top.

The technical details for the new stamp, which are found below, are very similar to the details for the original 2012 coil, including the frequency of the plate number, which is printed in the bottom margin on every 27th stamp in the coil roll.

The Scott catalog editors will examine the new stamp after it is issued before considering whether to list it as a major or minor variety in the Scott Specialized Catalogue of United States Stamps and Covers.

The stamp was designed by Carl T. Herrman and illustrated by Nancy Stahl.

An 11:30 a.m. first-day ceremony for the new 1¢ Bobcat coil will take place Saturday at the Aripex stamp show in Mesa, Ariz. (the official first-day city).

The Aripex website reports that the ceremony will take place in the Grand Plaza just outside of building C at the Mesa Convention Center, 263 N. Center St.

First-day cancel ordering information
Standard ordering instructions apply. Collectors requesting first-day cancels are encouraged to purchase their own stamps and affix them to envelopes. The first-day cover envelopes should be addressed for return (a removable label may be used), and mailed in a larger envelope addressed to 1¢ Bobcat Stamp, Postmaster, Main Post Office, 135 N. Center St., Mesa, AZ 85201-9998. Requests for first-day cancels must be postmarked by April. 22.
The Postal Service’s uncacheted first-day cover for the 1¢ Bobcat stamp is item No. 786916 at 94¢. USPS order numbers for stamps and FDCs also appear in Linn’s 2015 U.S. Stamp Program.