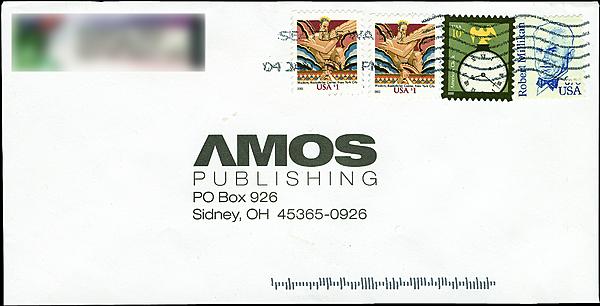 Two $1 Wisdom definitive stamps were mistakenly used as 1¢ stamps on this cover postmarked Jan. 4, 22 days before the first-class letter rate jumped from 46¢ to 49¢.

Much as the United States Postal Service might like it to be so, it can’t just snap its fingers and raise postal rates.

The process takes time, including winning approval from the Postal Regulatory Commission for any proposed rate increase.

During these back-and-forth deliberations, Linn’s stays on the case, informing readers what the probable outcomes might be, as well as providing a breakdown of the final approved rates.

All of this background helps explain two interesting things about the franking.

Although I have no way of proving it, I suspect the mailer erroneously thought the new 49¢ rate was in effect at the time he mailed his correspondence to Amos Publishing, the parent firm of Linn’s.

Perhaps he read online about the increase in the Jan. 13 issue on Linns.com and misinterpreted the story. Or maybe he just forgot the date of the increase and decided to play it safe and use 49¢ postage.

In all fairness to the sender, though, the dollar-sign symbol on the $1 Wisdom Statue is, to put it mildly, small and very easy to overlook. Because of this, its mistaken use as a 1¢ stamp is inevitable.

Since this stamp and its 2008 year-date counterpart (3766a) were issued, I’ve acquired a small number of covers with similar $1-for-1¢ frankings.

Regardless of the explanation, a sequence of events caused the sender to apply $2.47 postage that he thought was 49¢.

That mistake resulted in a very nice piece of modern U.S. postal history.

Before signing off, I have good news to report.

Dollar-Sign Stamps (formerly called Dollar Signs) is returning to a regular, monthly presence in Linn’s: the column will now run in the first issue of each month.