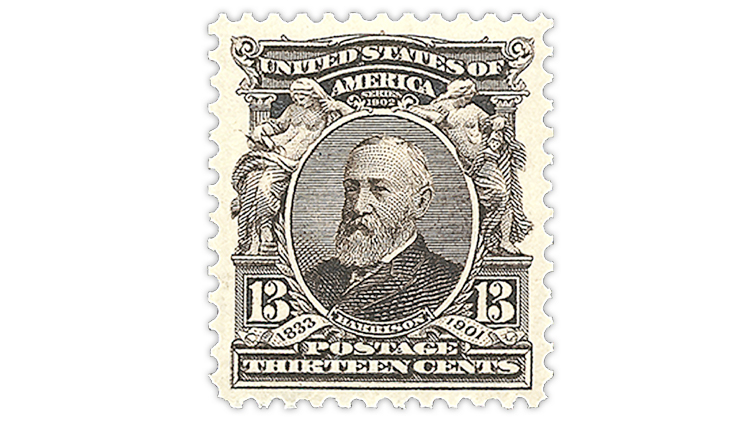 The ornate frames and engraved detail of the 1902-1903 definitive stamp issues make them favorites of many U.S. stamps collectors. The stamps were produced on paper watermarked double-line “U S P S” and are perforated gauge 12.

The design of the 13¢ purple black stamp (Scott 308) features the 23rd president of the United States, Benjamin Harrison. The earliest documented use of the stamp is Nov. 18, 1902.

Harrison is sometimes viewed as the ellipsis between Grover Cleveland’s two terms. He is the only U.S. president whose grandfather (William Henry Harrison) also served as president. His great-grandfather (Benjamin Harrison V) was one of the signers of the Declaration of Independence.

Harrison lost his bid for re-election to his predecessor, Cleveland, by a substantial margin. Harrison died of pneumonia on March 13, 1901. The purple black color of the 13¢ stamp was appropriate for mourning his recent death.

The 2020 Scott Specialized Catalogue of United States Stamps and Covers values the 13¢ Benjamin Harrison stamp at $40 in unused hinged condition and at $100 in mint never-hinged condition. The stamp is a good buy at around 70 percent to 80 percent of catalog value in either condition and very fine grade.