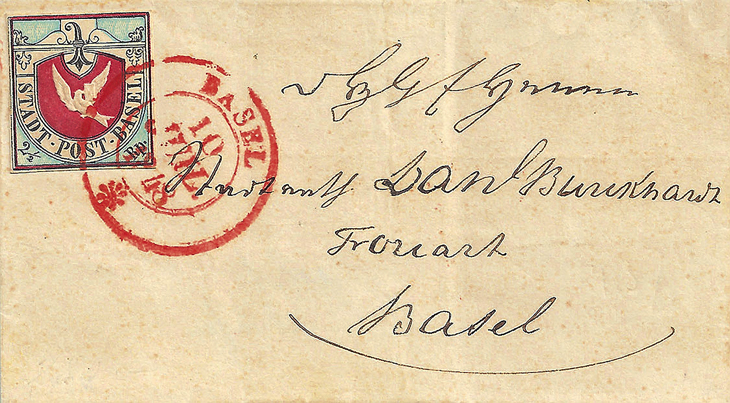 This cover bearing the 1845 Basel Dove stamp is dated July 10, 1848, and was used during the normal period of cantonal postage. It is a local letter, illustrating the payment of 2½ rappen for a single-weight letter sent within the city. Photo courtesy of

Basel is the third largest city in Switzerland, after Zurich and Geneva. It should not surprise collectors that its cantonal administration would begin to study the matter of postal reform, following in the footsteps of its two larger sister cities.

In Basel, canton and city, only a limited postal reform was instituted; it was anchored on the idea of prepayment as an irrefutably useful change, of value both to the general public and to the administration.

In the same spirit as in Zurich and Geneva, and probably with the objective of avoiding the imposition of new methods to supplant old ones, which might ruffle feathers, the change to prepayment was not mandatory. Probably for that reason alone, the program had very limited success. Unfortunately, the administrative steps taken toward the decision to issue stamps for prepayment of postage were not kept in the city’s archives and are presumed to be irretrievably lost.

For the facts of the matter, we can only rely on two documents. In a daily newspaper titled, in approximate translation, The Basel Intelligence Sheet, on June 30, the public is put on notice that stamps for the prepayment of postage will be on sale the next day at the post office. The price for each label is 2½ rappen.

Letters addressed within the town will require one stamp; those addressed to other localities in the canton will require two stamps, always for items weighing less than 15½ grams (1 loth).

The second document is the minutes of one meeting of members of Basel’s Postal Committee (again, in rough translation), which states that the new postal organization will “be in force on the first of July.” Thus, all available evidence is consistent with July 1, 1845, being the date of issue of Basel’s first and only stamp. But regarding the “new postal organization,” we have little or no knowledge.

The stamp was designed by architect Melchior Berri. The engraving and printing were done by the firm of Benjamin Krebs, at Frankfurt am Main, Germany.

The design is dominated by the coat of arms of Basel Canton, and later of Basel City. In the center is a crosier, which is defined in the Oxford Dictionary as a bishop’s processional cross. That requires an explanation.

Between the years 999 and 1503, Basel was governed by prince-bishops. That is, both temporal and ecclesiastical powers were bestowed on the same person. How that came about, in the 10th century, is of little importance; what can be said with certainty is that the arrangement was not unusual in the complex affairs of the Holy Roman Empire during the centuries that followed. The convergence of religion and imperial power was a necessary result of the structure that had been created by Charlemagne and Pope Leo III on that fateful Christmas Day of 800.

In 1501, following a devastating war that came to an end due to the mediation of Basel leaders, the confederated cantons of Switzerland invited Basel to join their powerful compact, granting Basel special powers and responsibilities of arbitration within the union. Basel accepted and, in the same year, formally joined the Swiss Confederation as the 11th canton. A battle of wills ensued when the governing prince-bishop, Christoph von Utenheim, refused to grant the canton a new constitution.

The city went its merry way, building its own city hall and government. But in the spirit of compromise, Basel kept the crosier as the central subject in its coat of arms, in rememberance of 500 years of honor and glory as principality and bishopric of the empire — not a minor legacy.

Below the crosier is a red background, and embossed within it a white dove in flight, carrying a letter in its beak. From there comes the stamp’s nickname: “The Basil Dove.”

Walking around the city, I noticed that each postbox also had the “Basil Dove,” much magnified, impressed in its steel door. As a philatelist, I could not help but being charmed and delighted to see the attention given by the post office to this detail.

Below and around the dove on the stamp is the inscription “STADT - POST - BASEL” (Basel City Post). And in the lower corners is the denomination “2 ½ Rp. [rappen].” The four corner spandrels bear a moire-pattern background of pale blue.

It has been said that the Basel Dove is the most beautiful of all classic stamps. I am sure that some might disagree. Great Britain’s Penny Black and Two-Penny Blue, Canada’s 3-penny Beaver, the Little Bears of St. Louis, the United States 10¢ George Washington of 1847, Belgium’s Epaulette of 1849, Brazil’s Bull’s-Eyes, and the Western Australia Black Swan are other first issues that, in my opinion, merit mention in the same category.

Its execution raised some complexity, and that is probably the reason the Basel authorities gave the printing contract to a firm so far away as Frankfurt am Main. Perhaps the engraver and printer, Benjamin Krebs of that city, had already acquired a reputation for very fine and detailed workmanship, and the people of Basel would have wanted nothing less.

Indeed, the printer did fine work on this stamp. In spite of having to go through the press four times, it is rare to find examples with even one color off-register. Other than minor flaws in the background red color, the only other significant variety is the double embossing of the dove, which is extremely rare and must have affected very few stamps.

The stamp was printed in sheets of 40: five rows of eight stamps each. There were two printings, the first of 20,800 stamps and the second of 20,600 stamps, for a total of 41,400. How many were used is not known, but judging on the relative scarcity of mint and used stamps available today, we can make an educated guess that three-quarters were used. A mint Basel Dove is shown in the first illustration.

Begining Jan. 1, 1849, the federal government assumed responsibility for postal matters in all parts of Switzerland. Theoretically, the stamps of the cantons were no longer in use after that date. However, Swiss federal stamps were not available until early 1850.

Because stocks of Basel Doves were still available, they were commonly used during 1849 and even in the first months of 1850. The cover shown here is dated July 10, 1848, and was therefore used during the normal period of cantonal postage. It is a local letter, illustrating the payment of 2½r for a single weight letter sent within the city.

THE GREEN AND VERMILION BASEL DOVE

For the past century and a half, a stamp with green color instead of blue in the spandrels was said to be a proof and trial color. Early on it was determined that the impression was an early one, and therefore the green stamps were printed before the normal blue ones. And, it has been ascertained through the years that genuinely used examples do not exist.

Armed with these two pieces of information, it was natural that early stamp students and catalog makers listed the green stamp as a proof. It was easy to arrive at this conclusion.

But there was an unresolved issue. The green stamps circulating and in collections were simply too many to have been reasonably submitted as proofs.

For instance, it is a fact that a complete sheet was acquired by Sigmund Friedl, and could be examined at the Friedl Museum in Vienna. It is now the property of a private collector in Switzerland. Other multiples are in postal museums, and many other examples are in private collections.

It has recently come to light that a partial sheet of the green Basel Dove bears the following penned inscription at the margin (in translation):

“They were ordered through me of Krebs, Frankfurt-on-the-Main, and were delivered by him.”

This inscription, combined with other deductions, led Swiss experts to another view of the matter. It is now believed that the printer, Benjamin Krebs, finished work on one part of the order, and personally delivered his product to the postal committee in Basel.

Upon seeing the stamps, the authorities decided the colors had to be changed to a carmine-red for the background, and a light blue for the corner spandrels. Shortly thereafter came the first printing with the altered colors, consisting of 20,800 stamps, or 520 sheets of 40.

So it happened that the stamp had its status changed from “proof” to “unissued stamp.” If invoices were available to examine, that could definitively clear the matter. Unfortunately, such documentation is not available. Perhaps some day the entire archive regarding Basel’s first and only postage stamp will be found.