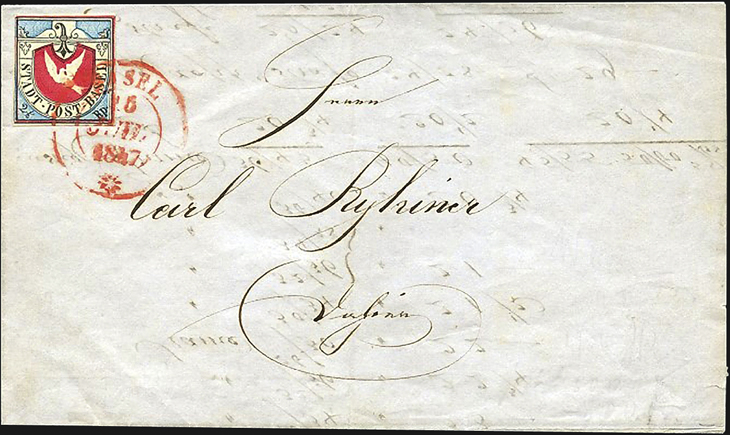 A folded letter from 1847 mailed with the 1845 2½-rappen three-color Basel Dove stamp will be offered during the Oct. 16-17 auction conducted by Schwarzenbach Auktion Zurich in Switzerland.

The Oct. 16-17 auction from Schwarzenbach Auktion Zurich includes an example of the 1845 2½-rappen Basel Dove stamp used on a folded letter.

The Basel Dove is the only stamp issued by the canton of Basel in Switzerland, and it is cherished for its attractive three-color design (it was the first stamp printed in three colors) and its embossed image of the white dove in the center, the first stamp worldwide to depict a bird.

The stamp on this cover is identified as an example of the plate variety from position 24 with plate flaw in the form of spots or flecks under the “S” in “BASEL.”

It is tied to the cover with a double ring red 1847 Basel postmark.

The cover is described by Schwarzenbach as one of the most attractive covers of this quality, with extraordinarily fresh colors.

It is signed by Moser and accompanied by authentication certificates from Emil Rellstab, and from Martin Eichele for Briefmarken Prufstelle Basel.

The minimum bid for this cover as listed by Schwarzenbach is 20,000 Swiss francs, which converts to a little less than $20,500 in U.S. dollars about three weeks before the scheduled start of the auction.

The 2015 Scott Classic Specialized Catalogue of Stamps and Covers values the Basel Dove on cover at $25,000, with the value in italics, which on high-value items generally identifies an object that trades very infrequently.

The auction includes additional stamps and covers from the remaining two cantonal administrations of Zurich and Geneva. Among these is an 1846 Zurich cover with a single franking of the 1843 6r black stamp, described by Schwarzenbach as having good-to-wide margins on all four sides. The stamp is struck with the black Zurich rosette cancel, and the cover also shows a black Winterthur round postmark.

The Schwarzenbach auction includes single lots, groupings and collections from Switzerland, Germany and other European countries. There also is a nice array of choice worldwide material.