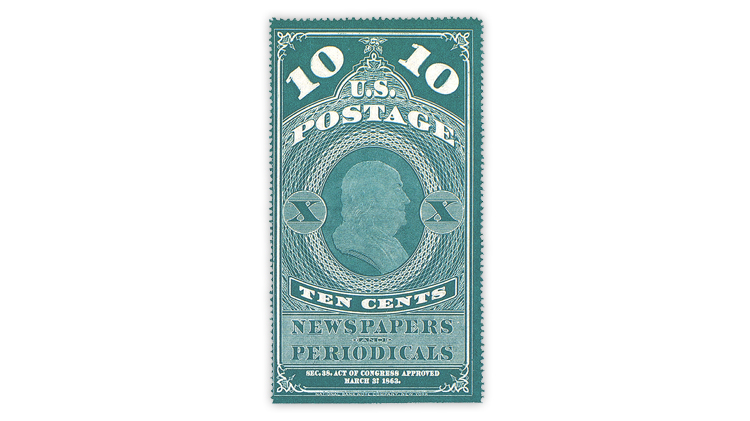 The first newspaper and periodical stamps issued were very large and colorful: a 5¢ George Washington stamp, a 10¢ Benjamin Franklin stamp and a 25¢ Abraham Lincoln stamp (Scott PR1-PR3). The typographed and embossed stamps were printed on thin hard unwatermarked paper without gum by the National Bank Note Co. in sheets of 20 divided into panes of 10.

Look for the 10¢ blue green Benjamin Franklin newspaper and periodicals stamp (Scott PR2). The Scott Specialized Catalogue of United States Stamps and Covers values the stamp in unused (without gum as issued) condition at $300. A used example is valued at $2,000 with the value in italics.

Almost all used examples are canceled by blue brush strokes and have faults such as tears, stains or creases. Prices for used examples depend on the nature of the faults and appearance of the stamp. An unused example in very fine grade without a natural straight edge is a good buy at full Scott catalog value.

The 4¢ brown Grant stamp is a good buy