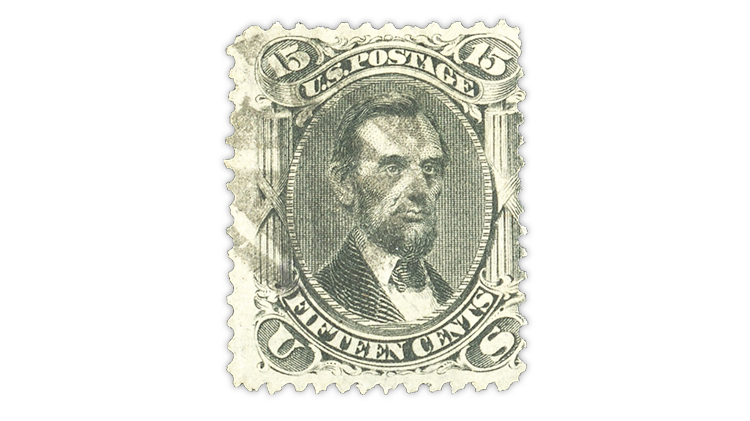 This United States 1867 15¢ black Abraham Lincoln stamp with Z grill (Scott 85F), last seen on the market in 1975, sold for a record $1,610,000 during the July 10 Cherrystone Philatelic Auctioneers sale of the New Amsterdam collection. 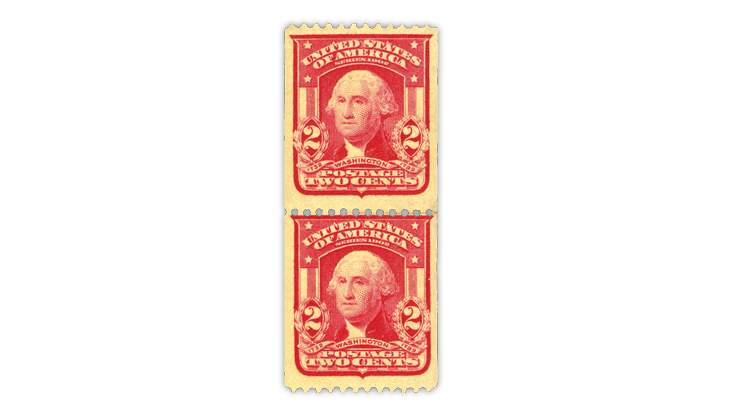 Two determined bidders vied for this 1908 2¢ carmine George Washington vertical coil pair (United States Scott 321) during the July 10 Cherrystone sale. The pair was sold to the winner for an impressive $805,000.
Previous
Next

A new auction record for a single United States stamp was set by Cherrystone Philatelic Auctioneers on July 10 in New York City.

The single-owner sale of U.S. stamps and covers included one of two known examples of the 1867 15¢ black Abraham Lincoln stamp with Z grill (Scott 85F), which Cherrystone hammered down for $1.4 million.

The 15¢ Lincoln Z grill Cherrystone sold July 10 was part of the 220-lot New Amsterdam collection, the culmination of the consignor-collector’s 50-year effort to fill all the spaces in a Scott U.S. National album.

Among the highlights of the New Amsterdam sale was an 1867 3¢ rose George Washington stamp with B grill (Scott 82), one of only four known, which realized $661,250.

The four known examples of the 3¢ B grill stamp all came from the same cover sent from Mason, Texas, to Darmstadt, Germany.

The lot for the 3¢ B grill stamp in the New Amsterdam sale also included the original cover, which clearly shows the spots where the four rare stamps were once affixed.

One of the most surprising realizations of the sale came in the section of 20th-century material.

The collection included an unused original gum pair of the 1908 2¢ carmine George Washington vertical coil stamp (Scott 321). This pair is one of only four authenticated unused pairs available to collectors.

Two floor bidders eventually went head-to-head, and the stamp was hammered down to the winning bidder for $700,000. With the buyer’s premium tacked on, the final realization was an impressive $805,000.

Heavy floor, online and phone bidder activity was apparent throughout the sale, with significant competition for the rarest stamps in the collection.

By the day’s end, 75 different bidders had won lots in the sale, with more than double that number of bidders throughout the sale.

The three rare grilled stamps highlighted here were all won by the same floor bidder. The stamps, which sold for a total of $3,421,250, were transported to the winning bidder following the auction by armored car.