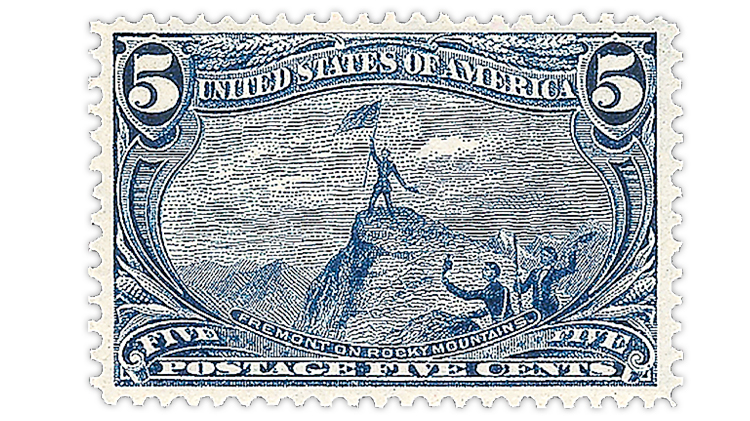 The United States 5¢ dull blue stamp featuring John C. Fremont waving an American flag from the top of a mountain peak (Scott 288) is from the popular 1898 Trans-Mississippi Exposition issue.

John C. Fremont (1813-90) was one of the most fascinating characters in 19th-century American history. An explorer, soldier and politician, he earned his sobriquet, the Pathfinder, by leading five exploratory expeditions of the American West.

With his scout and comrade Kit Carson, Fremont achieved many firsts as he explored the sources of rivers, passes through mountains, and possible routes for a transcontinental railway.

The design of the 5¢ dull blue stamp (Scott 288) from the 1898 Trans-Mississippi Exposition issue depicts a tiny figure of Fremont waving the American flag atop a peak in the Rocky Mountains.

The Trans-Mississippi Exposition issue is a perennial favorite with U.S. collectors, and this stamp is no exception. The 2020 Scott Standard Postage Stamp Catalogue values it at $100 in unused original gum condition and at $275 in mint never-hinged condition.

The stamp is a good buy in unused original gum condition at around $80. For an example without faults in very fine grade and mint never-hinged condition, you may have to pay full catalog value.