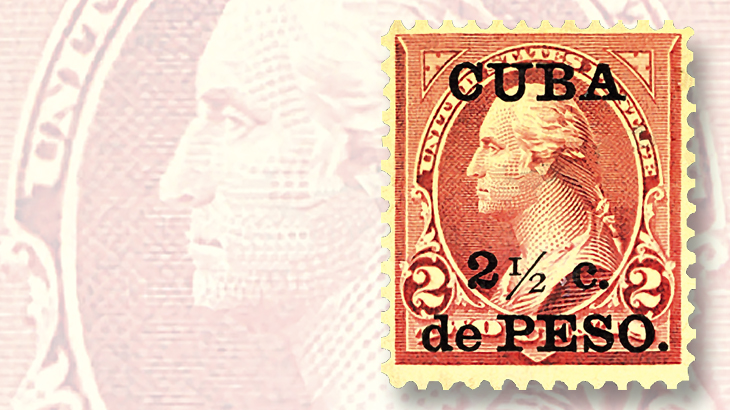 President Obama recently made history by becoming the first president of the United States to visit Cuba since Calvin Coolidge.

One of the world’s last remaining hardline Communist dictatorships, Cuba has a long, involved history with the United States. A former Spanish colony, it had been in a protracted revolt against Spain when the United States intervened with the Spanish-American War in 1898.

Temporarily placed under U.S. military administration, Cuba became an independent republic in 1902. However, the United States retained the right to intervene in Cuba’s financial and foreign affairs.

The dictatorship of Fulgencio Batista was overthrown in 1959 by the Communists led by Fidel Castro. Cuba remains one of the most repressive dictatorships in the world, with political dissenters routinely arrested and tortured.

In 1899, the U.S. military administration overprinted and surcharged U.S. definitive stamps for use in Cuba. We recently filled an order for the 2½-centavo-on-2¢ reddish-carmine George Washington stamp (Scott 223). The basic stamp used for the overprint and surcharge is the First Bureau issue type III (Scott 267). In examining 30 examples of the overprinted stamps, we found that all were on the type IV stamp (U.S. Scott 279B), which made them Cuba Scott 223A.

Practice is required to distinguish between type III and type IV. The 2016 Scott Specialized Catalogue of United States Stamps and Covers has good descriptions and illustrations of the types. The easiest way to identify type III is to look for the 1-millimeter bump on the oval from re-engraved dots opposite the “UN” in “UNITED.”

The Scott U.S. Specialized catalog values Cuba Scott 223 in unused hinged condition at $5 and at $12.50 in mint never-hinged condition. This stamp is not easily found and is likely undervalued. If you find it offered at Scott catalog value, we think it is a very good buy.