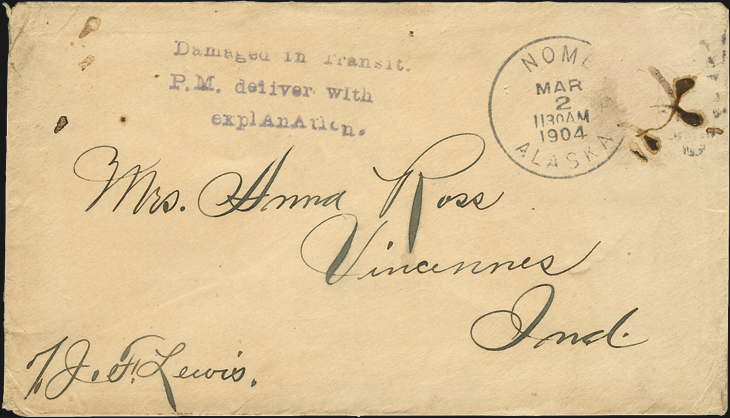 This 1904 cover from Alaska to Indiana got wet enough that the stamp came off. The handstamp reads, “Damaged in Transit.” But how?

To me an unsolved philatelic puzzle is like a splinter under the skin. It needs to be dealt with or it becomes a permanent irritant. Such a problem is the Alaska-origin cover shown nearby.

I obtained this cover for my collection of auxiliary markings showing delays in the mail. But what was the cause of the delay?

The cover was sent March 2, 1904, from Nome, Alaska, to Vincennes, Ind. The handstamp reads, “Damaged in Transit, P.M. deliver with explanation.” Apparently the cover got wet, causing the stamp to fall off. This is confirmed by the back flaps of no longer sticking together.

After researching the possibility of a train accident without success, I asked a succession of friends (dealers and collectors) if anything in their experience matched? No luck.

Finally, I joined the Alaska Collectors Club (American Philatelic Society affiliate, No. 218) and wrote a short article for the Alaska Philatelist, asking for help. This publication, capably edited by Eric Knapp, goes to readers nationwide who have an interest in Alaska postal history and Alaska on stamps.

There was only one response, but a helpful one, from Hal Vogel:

“I too am not aware of any significant traumatic event that would have occurred then, but you asked for an opinion, so here goes.

“March 2 is rather early in the season for boats to Nome (potentially still frozen at that time). There could have been an early ice break out, but assuming there was not, then the mail would have gone overland, probably by dog sledge.

“Dog sledging from there even today would be a challenge, especially during this period when the ice and snow are not optimum for travel. There are numerous reports of overland mail being damaged, lost, etc. en route from the inners of Alaska to wherever (in this case, it probably had to travel overland quite a distance to the south east to meet a steamer for Seattle, San Francisco or Port Townsend). There were not many choices in those days.

“The Nome gold rush was only four years old and conditions were rather primitive. Probably someone had the ad hoc contract to take a certain quantity of bagged mail to some interim point, where it would continue going southeast and eventually to the lower 48. Anywhere en route could have been a trouble spot, where the mail could have been involved in a mishap in the slush and snow.

“There also are a number of waterways that had to be crossed, where bagged mail could fall in. There even were cases of mail carriers meeting their maker en route and someone later having to find and retrieve interrupted mail. Probably that mail would have looked something like your cover.

“My further guess is that an explanatory note went with any recovered mail bag, which then may have been copied in the lower 48 for each piece’s on group’s terminus.

“Wish I could be more specific, but unless someone comes up with a newspaper story of exactly what happened, this might be the best we can do.”

I am delighted with this as it is specific as to the conditions such mail faced, plausible and helpful, plus a good illustration of what the carriers of Alaskan mail had to contend with. So, thank you Hal.