1921 Cilicia postage due set difficult to find in sound condition 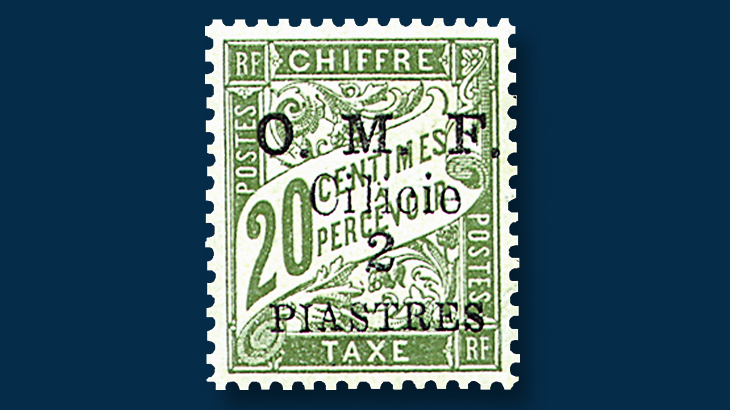 The 1921 Cilicia postage due set of four stamps of the French occupation (Scott J13-J16) is difficult to find in sound condition in grades of fine-very fine or better, and is a good buy at the 2018 Scott Standard Postage Stamp Catalogue values.

Cilicia, formerly part of the Hittite, Persian, Macedonian, Roman and Byzantine empires and an Armenian kingdom, is located on the southwestern coast of Asia Minor.

More than 170,000 Armenian refugees, survivors of the genocide conducted by the Turks, were resettled in the area, originally with the idea of creating an independent Armenian state.

Because of squabbles between various Armenian groups, as well as between the British and French, the idea was abandoned and the territory returned to the new Republic of Turkey.

In 1921, French authorities overprinted and surcharged French postage due stamps with “O.M.F. Cilicie” and with new denominations in piasters (Scott J13-J16).

The Scott Standard catalog values the set at $43.50 in both unused hinged condition and used condition. This set is difficult to find sound in either condition, as well as in grades of fine-very fine or better. It is a good buy at the Scott catalog values.