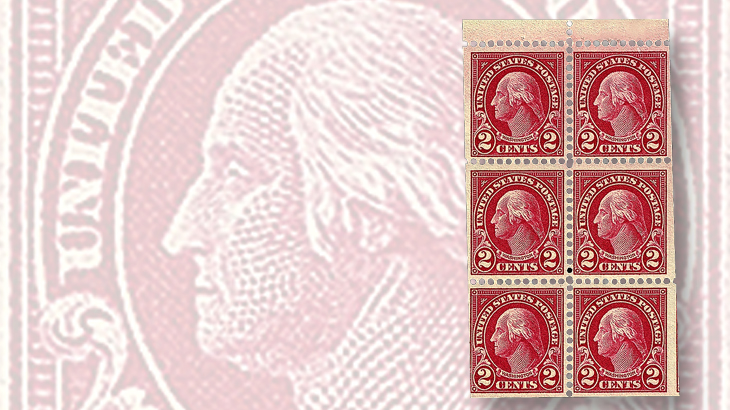 Specialist collectors are looking for the United States rotary press printing of the 2¢ carmine George Washington booklet pane of six (Scott 583a).

On April 14, 1924, the U.S. Post Office Department issued a 2¢ carmine George Washington stamp (Scott 583). The stamp was produced by rotary press printing with the stamp design measuring 19¾ millimeters by 22¼mm. The stamps on unwatermarked paper were perforated gauge 11 by 10. On Aug. 27, 1926, booklet panes of six of the stamp (Scott 583a) were issued.

The 2016 Scott Specialized Catalogue of United States Stamps and Covers values the booklet pane of six at $110 in unused hinged condition and $200 in mint never-hinged condition. This pane is in demand from specialist collectors and is a good buy at the Scott U.S. Specialized catalog value. It is truly scarce well centered with good margins, and such examples bring a premium over catalog value.

The Scott U.S. Specialized catalog states, “Two experimental plates were used to print No. 583a. At least one guide line pane (H) is known from these plates. The rest of rotary press booklet panes were printed from specially prepared plates of 360 subjects.” It further notes, “Only one example of No. 583a with guide line at right is recorded.” Obviously more than one was produced, and some of those might still exist. It doesn’t hurt to look for them.