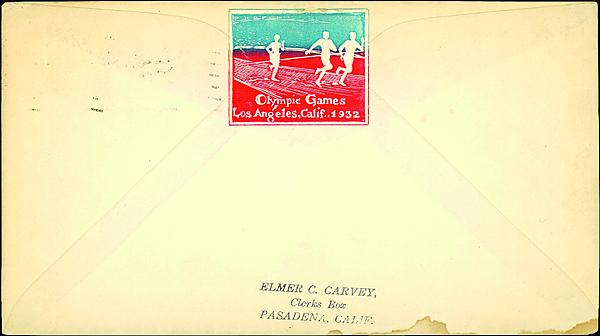 Figure 2. A purple handstamp on the back of the FDC shown in Figure 1 reveals that U.S. Post Office Department clerk Elmer C. Carvey (1888-1971) was likely the first owner of the cover. 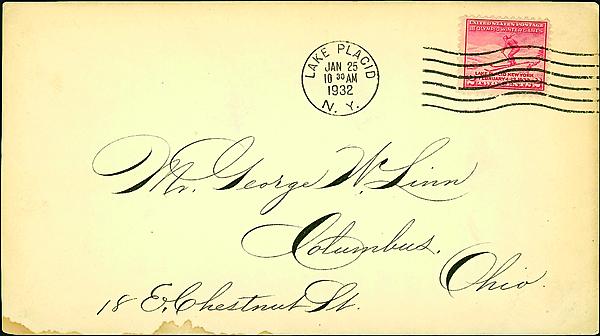 The therapeutic effects of stamp collecting are many. Among them is a favorite of mine: looking through boxes of inexpensive covers at stamp shows, in search of that proverbial gem that escaped the eyes of those who searched before you.

Pictured in Figure 1 is a marvelous first-day cover that Barbara Montgomery of New York plucked from the massive stock of cover dealer Alan Tohn at a show in the mid-1990s.

Tohn is a fixture at many stamp shows across the United States. He operates his business under the moniker Coverman.

Montgomery gravitated toward the cover for two reasons.

“I found it attractive both for the calligraphy and the fact it is addressed to [Linn’s founder] George Linn,” she said.

A single 1932 2¢ Winter Olympics stamp (Scott 716) paid the postage from the first-day city, Lake Placid, N.Y. (site of the third Winter Olympics), to Linn at 18 E. Chestnut St. in Columbus, Ohio, the address of his printing and publishing firm in 1932.

Figure 2 pictures the back of the cover. A red and blue label showing a trio of silhouetted runners is affixed over the envelope flap, which is tucked inside the envelope.

A purple handstamp near the bottom reveals the likely initial owner: one Elmer C. Carvey of Pasadena, Calif. (1888-1971), who served at the time as a clerk for the U.S. Post Office Department.

Montgomery acquired the cover from Tohn because she was making handpainted FDCs at the time.

“Although I had collected stamps since childhood, I had just begun making and painting first-day covers,” she said.

“I came home with a few hundred covers after my visit, most of them priced at 25¢.”

Montgomery vividly recalled how impressed she was with the Linn address rendered in “such beautiful calligraphy.”

And how did Linn’s learn of Montgomery’s George Linn FDC?

Enclosed with the ballot was a color photocopy of the front of the cover. Beneath the illustration, she wrote, “I found this gem in a dealer’s box.”

Intrigued, I wrote to her, asking for more information. She replied two weeks later, and the story you just read is the result of that communication.

I thank her for sharing her cover with Linn’s readers.