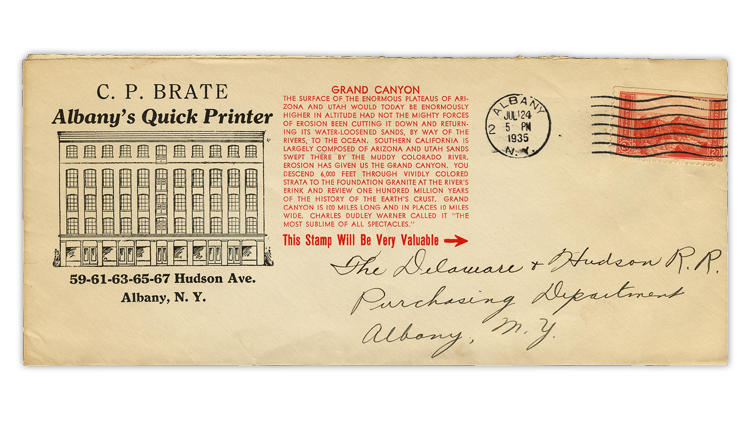 This 1935 cover franked with the 1934 2¢ Grand Canyon National Park stamp includes both advertising and a long paragraph on the stamp subject. The cover also claims “This Stamp Will Be Very Valuable.” That claim has not yet come true, nor is it likely to any time soon.

Very popular at the time, the stamps marked a departure from the run of smaller, often carmine rose, commemoratives of the prior decade, most of which featured people or man-made structures.

With the National Parks issue, natural wonders of America got recognition on full-size commemoratives, and the only criticisms could be that there weren’t enough stamps in the set, or that the stamps could have been even bigger.

On-cover usages are not scarce, but the 2¢ Grand Canyon (Scott 741) cover shown here is of more than ordinary interest.

This July 24, 1935, cover was sent from Albany, N.Y., to the purchasing department of the Delaware and Hudson Railroad, also in Albany. The corner card advertises C.P. Brate, Albany’s Quick Printer.

However, what draws philatelic interest to the cover is the bold claim below the description of the Grand Canyon: “This Stamp Will be Very Valuable.”

Sometimes, stamp popularity can turn into value. But in this case, just over 74 million of these 2¢ stamps were issued. Collectors bought large numbers of them to use on mail, to add to their collections, and to put away for a rainy day.

The 2019 Scott Specialized Catalogue of United States Stamps and Covers values the stamp at 25¢ used, 30¢ unused, and 40¢ mint, never hinged.

The creator of the cover did not modify his claim with a time period in which the stamp would ascend the heights of value. Maybe in another couple of hundred years?

U.S. Penny Black centennial: no stamp but many souvenirs