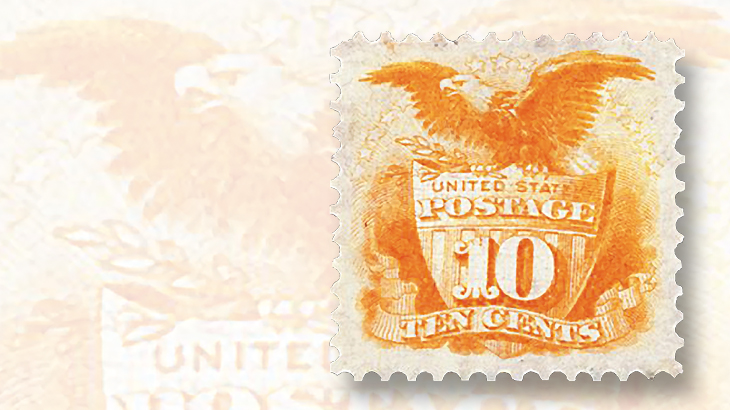 The United States 10¢ 1869 stamp. This single stamp became the focus of a specialized collection formed by Michael Laurence.

The first international stamp show I ever attended was the New York international show in 1956. Since the 1940s, I had been a fairly serious kid collector of United States stamps. But I’m not the show-going type, and this was my first stamp show of any sort.

Back then, I lived in Memphis and attended boarding school in New Hampshire. I would take the train back and forth, a two-day trip that involved changing train stations both in Boston and in New York. Quite by coincidence, on my way home for summer vacation in 1956, I had 10 hours in New York to visit the stamp show, which had opened days earlier at the new Coliseum on Columbus Circle.

Memory is fuzzy after six decades, but I recall being bowled over by the magnitude of it all. There was much more of everything — dealers, exhibits, special displays, post offices — than I had imagined.

At the show, I was transfixed by a specialized exhibit of 10 frames or more, devoted exclusively to a single common stamp in almost infinite variety. I believe it was the red 10-centime French Sower stamp from the early 20th century, but my memory may have tricked me here. Years later, when my friend Steven Rod showed me a catalog for the 1956 New York show, I couldn’t find such an exhibit in there.

My most vivid recollection is walking down Eighth Avenue to Penn Station after leaving the show. It was a clear, pleasant evening. On this walk, I concluded that was the kind of stamp collection I wanted to create: a highly specialized collection devoted to a single 19th-century United States stamp.

It took me a few years to settle on the stamp. I finally chose the U.S. 10¢ postage stamp of 1869 and have never regretted that decision. I’ve kept up that collection for more than 50 years. It will be part of the traditional exhibits at the current New York international show at the Javits Center. I’ll be there too.