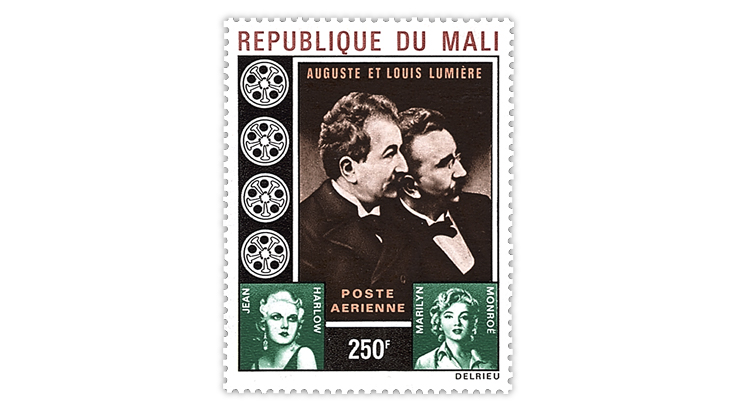 Mali’s 1970 250-franc airmail stamp commemorating the invention of the Lumiere brothers’ process of color photography (Scott C100) was the world’s first stamp to feature the likeness of Marylin Monroe.

In 1960 the former colony of French Sudan became the Republic of Mali.

Mali is a landlocked country in northwestern Africa between Mauritania, Algeria, Niger and a host of smaller countries. Much of its northern territory is in the Sahara Desert.

There are five major ethnic groups and at least 15 languages spoken in Mali.

Philatelically Mali is known for issuing a host of colorful topical stamps. One of our favorites is the 250-franc airmail issued July 27, 1970, to commemorate the invention of the Lumiere process of color photography.

The stamp features a photograph of Auguste and Luis Lumiere and includes small inset photos of American movie stars Jean Harlow and Marilyn Monroe at the lower corners.

Both actresses were quintessential cinematic sex symbols who died tragically early: Harlow at 26 and Monroe at 36. This was the first stamp in the world to picture Monroe, and it is a favorite of motion picture topical collectors.

The 2020 Scott Standard Postage Stamp Catalogue values the stamp at $4.50 in mint never-hinged condition. Although the stamp is not difficult to find, the demand for it is constant, and it is a great buy at full Scott catalog value.

For a real challenge, try finding it used on a small commercial cover.