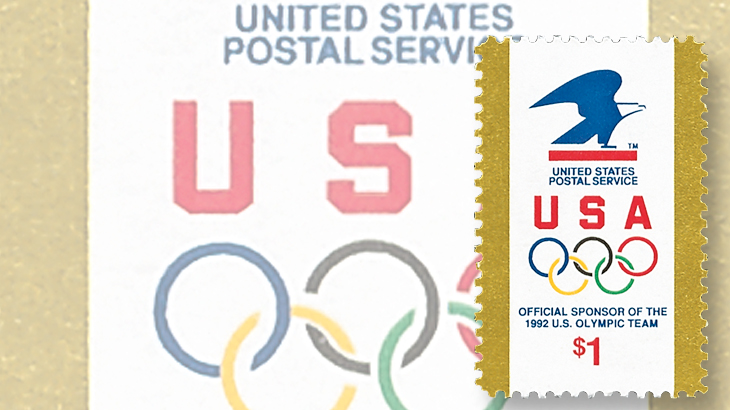 The 1991 $1 Olympics stamp prominently announces that the U.S. Postal Service was an “Official Sponsor Of The 1992 U.S. Olympic Team.” 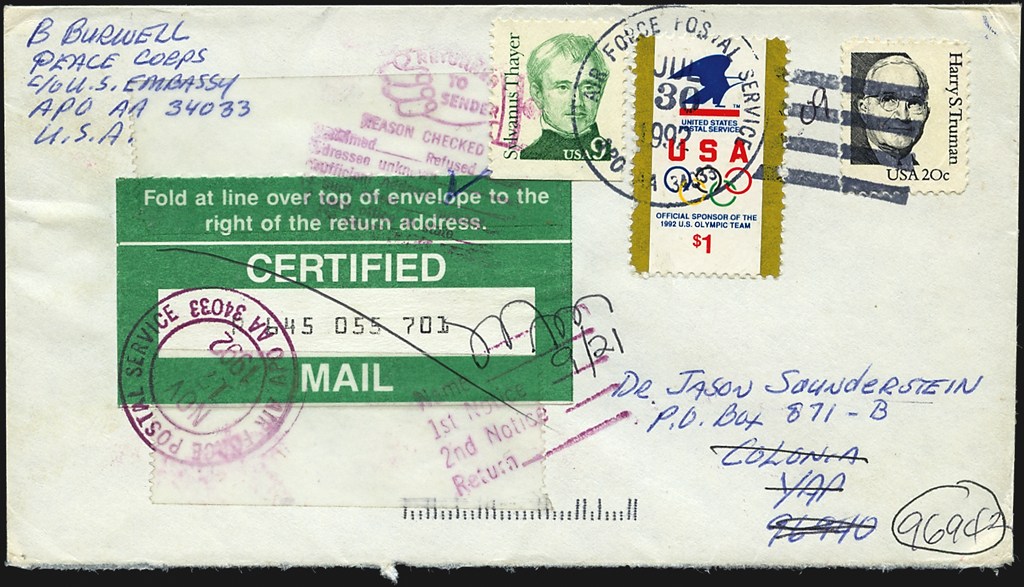 A 1991 $1 Olympics stamp paid the $1 certified mail fee on this cover mailed July 30, 1992, from the United States Embassy in Santiago, Chile, to Yap, Micronesia.
Previous
Next

On Sept. 29, 1991, the United States Postal Service issued a $1 stamp to promote its sponsorship of the Winter and Summer Olympic Games that would take place the following year in Albertville, France, and Barcelona, Spain, respectively.

When I began collecting the postal history of modern U.S. dollar-denominated postage stamps in the late 1990s, I paid little attention to the $1 Olympics stamp (Scott 2539).

It seemed little more to me than a miniature advertising billboard for the Postal Service to tout its support of the Olympics: “Official Sponsor Of The 1992 U.S. Olympic Team” is printed just above the red $1 denomination at the bottom of the stamp.

At the top of the stamp is the familiar USPS logo featuring a stylized eagle.

A bold, red “USA” and the Olympic rings fill out the middle of the design.

As Linn’s and others pointed out at the time, it seemed a bit much to issue yet another $1 stamp when both the $1 Johns Hopkins stamp (Scott 2194) and the $1 Seaplane coil (2468) were available for postal duty.

The vertical, commemorative-size format of the stamp was used because of strict requirements from the U.S. Olympic Committee concerning the use of the Olympic rings logo in tandem with the USPS logo.

One design feature of the printed stamp that has always bothered me is the two vertical gold borders at left and right.

The gold ink has a tendency to flake away from the perforated edges, which detracts from the overall appearance of the stamp — particularly on cover.

Speaking of postal history, a rather nice use is illustrated nearby.

A $1 Olympics, 20¢ Harry Truman and 9¢ Sylvanus Thayer combine to pay the 29¢ first-class postage and $1 certified mail fee on a small cover mailed July 30, 1992, from the Embassy of the United States in Santiago, Chile, to Yap, a small island in the Federated States of Micronesia.

Docketing on the cover indicates that the addressee was not on Yap, but in Chuuk, Micronesia, as shown by the circled 96942 ZIP code at lower right.

An initial attempt at delivery was made Sept. 21. Despite this, the letter never reached its recipient and was eventually returned to the sender.

A “Returned To Sender” pointing-finger handstamp shows that the letter was returned due to an insufficient address. A purple circular datestamp at left shows the cover arrived back at the U.S. Embassy in Santiago on Nov. 17, almost four months after it was mailed.

Some eight years later, in 2000, I added the cover to my collection via an eBay online auction.