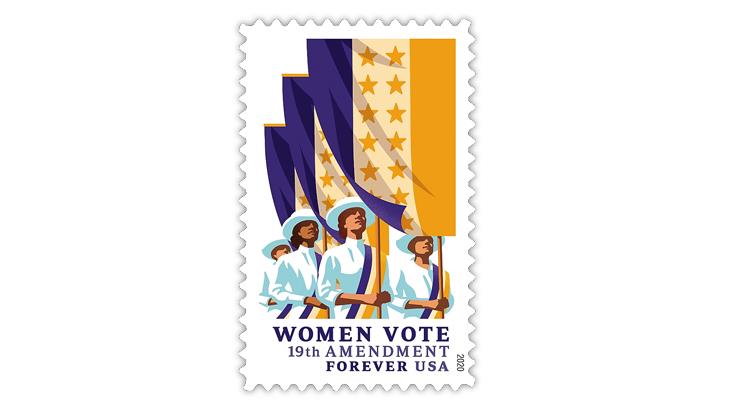 The 1920 ratification of the 19th Amendment to the U.S. Constitution, granting women the right to vote in elections, is celebrated on a new forever stamp to be issued Aug. 22. 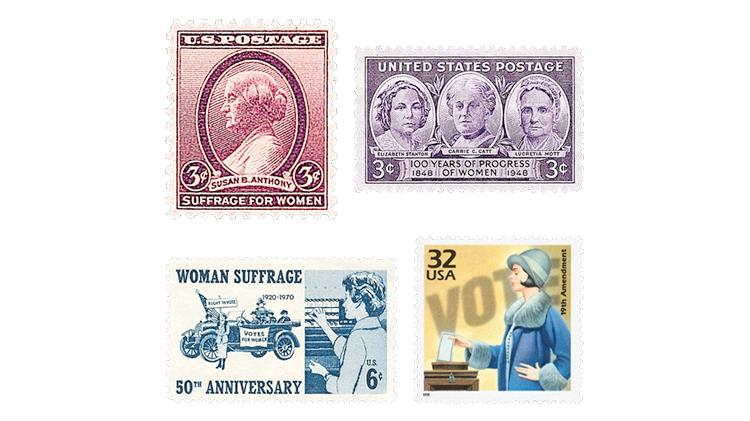 Key efforts to secure the right to vote for women have been commemorated on stamps in the past. Shown are the 1936 3¢ stamp honoring Susan B. Anthony; the 1948 3¢ Progress of Women stamp depicting Elizabeth Cady Stanton, Carrie Chapman Catt and Lucretia M 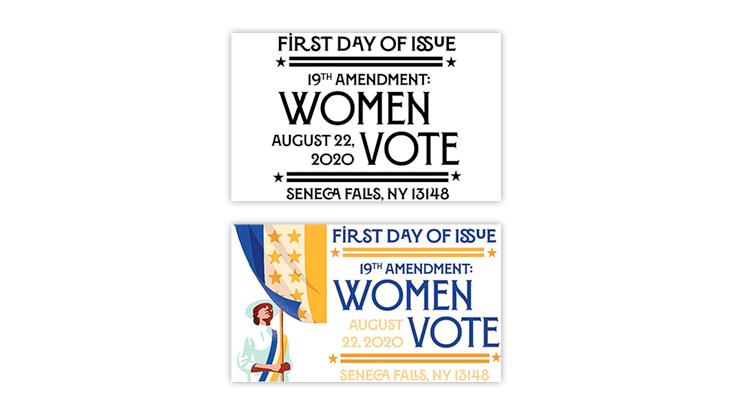 First-day cancels for the new stamp prominently display the phrase “Women Vote.” The color postmark includes a pictorial element of a suffragist as seen on the stamp art.
Previous
Next

The text of the 19th Amendment to the United States Constitution consists of fewer than 40 words, but by granting and guaranteeing women the right to vote, it has been a key element in the march to full equality that continues even today, 100 years later.

To celebrate the centenary of the amendment’s ratification, the U.S. Postal Service will issue a forever stamp it calls 19th Amendment: Women Vote. The nondenominated (55¢) stamp will go on sale Aug. 22 in a pane of 20.

The stamp is the third new Postal Service issue in three days, following the Innovations set of five forever stamps on Aug. 20, and the Thank You set of four on Aug. 21.

No in-person first-day ceremony is planned for the new stamp because of the ongoing COVID-19 pandemic. Some recent stamps, however, have been welcomed on the USPS Facebook and Twitter pages with virtual ceremonies on their issue dates.

The stamp artwork is a stylized illustration of suffragists marching in a parade or other demonstration, inspired by historic photographs, according to the Postal Service.

“The clothes they wear and the banners they bear display the official colors of the National Woman’s Party (NWP) — purple, white and gold.”

Established in 1916 to fight for women’s suffrage — the right to vote — the National Woman’s Party today advocates “for full equality for all women.”

Stahl’s depiction of an Amur tiger illustrates the nondenominated Save Vanishing Species semipostal issued Sept. 20, 2011 (Scott B4), and her images of soda fountain favorites were featured on five different forever stamps in 2016 (5093-5097).

The presentation of the National Woman’s Party colors on the new stamp shows the purple on top on the sashes worn and at left on the vertical banners carried.

Some historical photographs show sashes with the gold stripe on top and the purple on the bottom, while the current logo of the National Woman’s Party features the purple stripe first.

In reply to an inquiry, USPS senior public relations representative Sara Martin told Linn’s Stamp News: “USPS honors all of the women who worked for the right to vote. Different suffrage groups used different colors to signify themselves. The design is not intended to honor the National Woman’s Party, but through the use of colors associated with the group, does recognize the important role NWP played in the passage of the 19th Amendment.”

The stamps are offset-printed by Banknote Corporation of America.

Organized efforts to secure voting rights for women began in the 1800s but took several decades to accomplish.

The 1848 women’s rights convention in Seneca Falls, N.Y., is often described as the event that launched the movement to achieve women’s suffrage.

Organized by Elizabeth Cady Stanton and Lucretia Mott and attended by suffrage leader Carrie Chapman Catt and 300 others — both women and men — the convention passed a resolution on its second day stating “it is the duty of the women of this country to secure to themselves their sacred right to the elective franchise.”

Susan B. Anthony became an important leader in this fight, but the right for women to vote was not achieved before her death in 1906.

Efforts over the decades that followed brought about the formation of several groups working tirelessly for women’s suffrage. The National American Woman Suffrage Association formed in 1890 from two existing groups, and the National Woman’s Party came into existence a quarter-century later.

The suffrage amendment was first introduced in Congress in 1878, but it wasn’t until 1919 that it finally passed the House and Senate.

Three-quarters of the 48 states then in the Union were required to ratify the amendment.

“When Tennessee became the 36th state to ratify the amendment on August 18, 1920, the amendment was adopted,” according to the National Archives.

The text of the 19th Amendment simply reads: “The right of citizens of the United States to vote shall not be denied or abridged by the United States or by any State on account of sex. Congress shall have power to enforce this article by appropriate legislation.”

Numerous U.S. stamps have honored some of the prominent women involved in the effort to achieve women’s suffrage, as well as the ratification of the 19th Amendment.

Susan B. Anthony was first commemorated on a 3¢ stamp in 1936 (Scott 784). The amendment was ratified six months after what would have been Anthony’s 100th birthday.

On the 100th anniversary of the Seneca Falls Convention, Stanton, Mott and Catt were honored on a 1948 3¢ stamp inscribed “100 Years of Progress of Women” (Scott 959).

Among the others so honored is Alice Paul, who organized events promoting passage of the amendment and led the National Woman’s Party for many years.

The official first-day city for the new 19th Amendment: Women Vote forever stamp is Seneca Falls, N.Y., acknowledging the impact of the 1848 convention in establishing the suffrage movement.

First-day cancels in black and in color both feature the phrase “Women Vote” in prominent lettering. The color postmark also reproduces the image of one demonstrator from the stamp design.