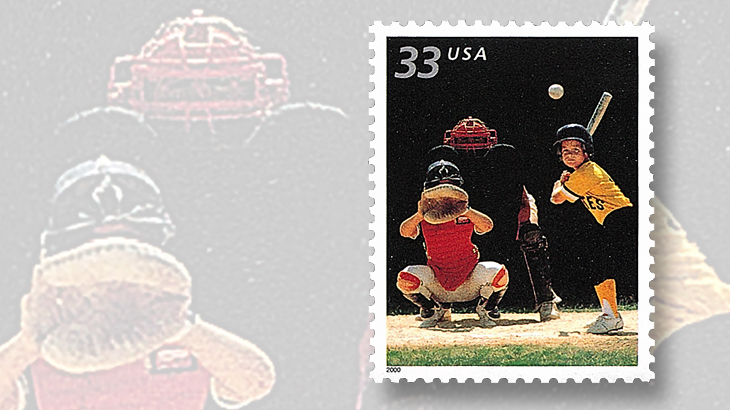 The cartoon caption contest stamp for April is the 2000 Youth Team Sports stamp showing a youth baseball game. Put yourself behind the plate or in the batter’s box, and tell me what you might be thinking or saying about baseball, presidential politics, or

Spring is here, and with it baseball season. Tickets for professional games cost a whole lot more than they did when I was growing up. Add a trip or two to the concession stand and a night at the ballpark for a small family can easily cost a small bundle.

But baseball is so much more than the professional leagues. Players from youth leagues through college deliver all of the enjoyment and drama of the game, if not by recognizable names who are paid millions of dollars just to show up at the park.

So let’s use the 33¢ Baseball stamp (Scott 3402) from the Youth Team Sports issue of 2000 for the April cartoon caption contest.

Picture yourself behind the plate, or in the batter’s box, and tell me what you might be thinking or saying about the game, how baseball mimics real life, politics in this presidential election year, or philatelic pursuits.

To be considered for the prizes, entries must reach me no later than April 22.