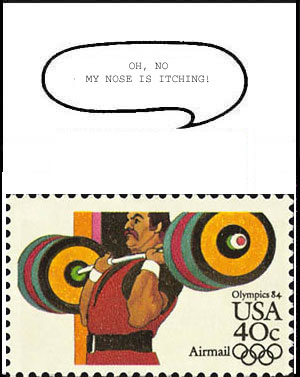 Quentin Skoulund of Cary, Ill., dreamed up an uncomfortable situation for the 40c Weight Lifter airmail stamp, winning the non-philatelic-line entry for the April cartoon caption contest. The next context will be announced in Linn's June 2 issue.

The cartoon caption contest stamp for April, shown in Figure 2, was the 40¢ Weight Lifter airmail stamp from the 1983 Olympics set. When gazing at the stamp, several U.S. Notes readers saw a direct connection to philately in the barbells.

The earliest example received was from Frank Brandon of Falls Church, Va., with "Good grief, shouldn't the U.S. Postal Service have a limit on the size and weight of postage stamp coils?"

Lifting weights inspired many entries focused on the problem of removing modern used stamps from paper. An example from Linda Duran from Lima, Ohio, has the athlete declaring "Lifting is my passion; lifting stamps off paper is my torment!"

The increasing numbers of stamps issued over the last couple of years motivated some readers to think about the impact of the river of stamps on the reference books used in the hobby. David Vikan of West Fargo, N.D., put it this way: "This should give me good practice for lifting my new set of Scott catalogs!"

The philatelic line winner, by Royce Jones of Honolulu, Hawaii, takes on the unusual formats that are characteristic of the issues of a particular Asian nation: "These new Bhutan stamps sure are heavy!"

On the nonphilatelic side, Quentin Skoulund from Cary, Ill., poses a situation we can all sympathize with. This entry is shown in Figure 2.

"Another postal rate increase? That does it! I'm carrying these barbells to China!" by Roger Malcolm from Kewanee, Ill.

"What do you mean, I have to add a penny to be first class?" sent by Michael Moticha of Apple Valley, Calif.

"Instead of the clean and jerk, I'd rather try the lick and stick method," from Regi Ausmus of LaVerna, Calif.

"Just gotta get back in shape so I can lift my 'U.S. Used Stamps On Piece' album when it is full," by Kirby Willems of New Windsor, Ill.

"You have to be a real dumbbell not to buy more forever stamps before the rate increase!" from Steve Kotler in San Francisco, Calif.