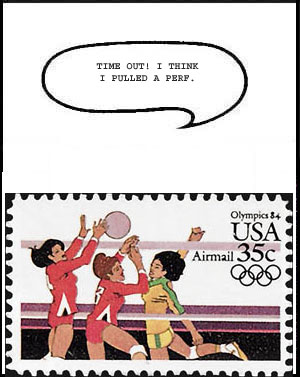 Bradley Miller of Huntsville, Ala., neatly mixed stamp collecting with sport to win the philatelic part of the Januay. The next context will be announced in Linn's March 3 issue.

In the modern world, we are often surprised by how invasive communication tools can be.

Quite a few responses to the January cartoon caption contest stamp made that connection. The contest used the 1983 35¢ Volleyball stamp, shown in Figure 3. Vern Sweeney of Kansas City, Kan., captured the phenomenon by having one player say to the other, "Your cell phone is ringing."

Postal connections were used often, with the most popular being some version of "It's 'Return to Sender' for this one!" from Bill Boyington of Shoreline, Wash.

Several entries harked back to last year's Don Imus incident, in which the radio personality disparaged a black-majority women's college basketball team. M. Lebel of Salisbury, Md., spoke for many with, "If you see Imus, spike the ball at him!"

Another group of entries led to the nonphilatelic winner, who used the U.S. Postal Service as a convenient target.

Let the Postal Service get one item out of 1,000 lost or damaged, and the person affected will tell friends and relatives, and the incident will be thought of as characteristic of service, although it is not.

The winning entry gives me a chuckle. It is from Paul Dunn of Painesville, Ohio, who transports the players to a post office, and one asks the other, "Is that a package or a flat?"

The winner of the philatelic part of the contest, shown in Figure 3, is Bradley Miller of Huntsville, Ala. He combined a sports injury with stamps in a fanciful way.

Both winners will receive Linn's U.S. Stamp Facts 19th Century published by Amos Press, or a 13-week subscription to Linn's (a new subscription or an extension). The book has a retail value of $14.95.

"Now this is what I'd call a fine example of a centerline block!" from Steve Kotler of San Francisco, Calif.

"Next game let's wear bikinis and really fill the stands!" from Terry Meier.

"I'm playing volleyball only because I didn't make the stamp collecting team," sent by Ken Bonvallet of Westerville, Ohio.

"We volleyballers are gym-dandies!" by Chuck Henderson of State College, Pa.

"We're having a ball doing ballet!" by Donald Garrett of Reno, Nev.