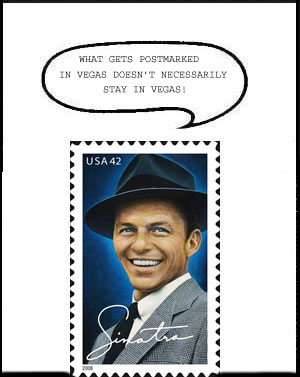 Gus Spector mixed one of Frank Sinatra's favorite venues with postal operations to come up with this winning philatelic line for the June cartoon caption contest featuring the new 42¢ Frank Sinatra stamp.

It seems that Frank Sinatra fans are about as ardent as Elvis Presley fans. The new 42¢ Frank Sinatra stamp in Figure 3 was used for the June cartoon caption contest, and many entrants took the opportunity to thumb their nose at Elvis.

Many entries took the Postal Service to task for how the Sinatra stamp was categorized. Jack Simon from Rego Park, N.Y., has Frank saying, "So, I'm not a Legend of Hollywood, USPS. Well, take a long walk off a steep cliff!"

My take on this mini controversy is that Sinatra's earliest and most recent successes, and the way he is remembered by most Americans, is as a recording star and singer of memorable songs. The fact that he achieved significant success on the silver screen is undeniable, but the bulk of his work is his singing career.

Quite a number of people, even as far away as Finland, sent entries that simply said, "I did it my way." Others tied that line to how he might have felt if he had been a stamp collector.

A couple of my favorite entries put new words to Sinatra songs. Keith Shallbetter from Magna, Utah, substituted these words for "Witchcraft": "The stamp that's stuck on there, Won't lift but it will tear, Cause me to pull my hair, It's self-stick!"

"Fly Me To The Moon" is the tune for this entry from Jim Koncz of Duncansville, Pa.: "Mail me to the moon, Get me lost among the stars. What's the postal service like, on Jupiter and Mars?"

The nonphilatelic line winner, from Warren Treuer of Alexandria, Va., is perhaps a bit obscure, but relates to several themes: "Frankly, and of course speaking broadly, life for me has been a ball."

On the philatelic side, Gus Spector from Phoenixville, Pa., gets the prize for the winning line shown in Figure 3.

"Use me and your letter will be doubly Franked," from Ken Bonvallet of Westerville, Ohio.

"All stamps would be soakable if they did it my way!" by an unknown entrant from the Northeast, per the entry's postmark.

"I tried watching reality television, but it made me 'Chairman of the Bored,'" sent by David Vikan of West Fargo, N.D.

"First Class, baby – it's the only way to go," by Brian Magee of Wethersfield, Conn.

"If I had my way, I'd reduce the postage rates," by Richard Novick from Marlboro, N.J.