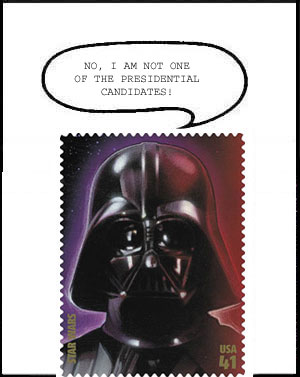 George Zybert of Chattaraugus, N.Y., provides this winning cartoon caption entry for the 41¢ Darth Vader stamp from Star Wars. The next context will be announced in Linn's April 7 issue.

The 2007 41¢ Darth Vader stamp from the Star Wars set, shown in Figure 3, was used for the March cartoon caption contest. This stamp drew more entries than any contest in my recent memory, and excellent entries at that.

The most frequently used theme was the difficulty collectors now face with the lack of a water-soluble layer on some recent stamps issued by the U.S. Postal Service.

A good example of this theme was the entry from Brian Magee of Wethersfield, Conn.: "Even the Force won't help me soak these @#$%^&! stamps off paper."

Many others were declarations of status or parenthood by Darth Vader, such as this one first proposed by Bob Harvey of Rome, Pa.: "Luke, I am your Postmaster General!"

The fact that the Vader stamp is a self-adhesive received several entries. One that was particularly apt, read "Go ahead, try to lick me. Make my day!" from Jack Standen of Elyria, Ohio.

Postal services appropriate to the times were projected by another group of entries. This entry has Vader being asked a question by a Postal Service window clerk: "Greetings. Will this be Interplanetary Mail, or the Galactic rate?" by Michael Hatfield of Fayetteville, Ark.

Selecting winners was difficult, but in the end, the entry shown in Figure 3 just got funnier the more I looked at it. It is from George Zybert from Cattaraugus, N.Y. He wins the nonphilatelic part of the contest.

Why is it funny, you ask? Would you want to be a presidential candidate in this age, with legions of media people looking to make their reputation at your expense, not to mention your opponent looking for chinks in your armor from which to construct an electoral advantage?

On the philatelic side, Roger Malcolm of Kewanee, Ill., wins with "Aw shucks, what does Yoda have that I don't?"

I am sure Vader expected to win the public vote as most popular, though I have to say I voted for the astromech android R2-D2.

"Come over to the Dark Side: collect space stamps!" by Bradley Miller of Huntsville, Ala.

"Why do I always have to wear this to announce a rate increase?" from Grant Berry Jr. of Hughesville, Pa.

"I'm Vader, the biggest, baddest stamp on the pane!" sent by Mark Snow of Columbus, Ohio.

"Not tonight, dear. I have a headache," by Ralph Wiltamuth of Los Angeles, Calif.

"No dog will bite me in my new mailman's uniform!" from T. Ryan in Peekskill, N.Y.