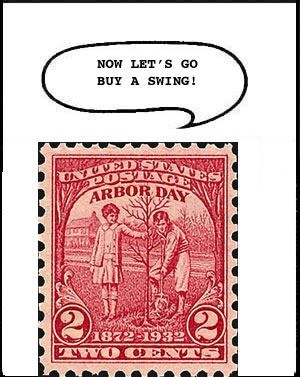 R. Heinen of Shrewsbury, Mass., captures the prize for the winning nonphilatelic line winner in the November cartoon caption contest, featuring the 1932 2¢ Arbor Day stamp. The next contest will appear in Linn's Jan. 5, 2009 issue.

Threadbare is a term that well describes the tree being planted by two youngsters in the design of the 1932 2¢ Arbor Day stamp shown in Figure 3. The stamp was the subject of the cartoon caption contest for November.

Several of the entries aimed at fixing that problem, such as this example from Quentin Skoulund of Cary, Ill.: "For a dollar more we could have bought a live tree with leaves!"

Another group of entries went back in history to the apocryphal story attributed to Parson Weems which refers to early misdeeds of the first U.S. president. Mike Lubrano from Brooklyn, N.Y., sent in this take-off: (Ruth) "Well, Alvin, this is the third tree you've planted." (Alvin) "I know Ruth, and I'm tellin' ya, if that Washington kid chops this one down, I'll hit him so hard, when he wakes up his clothes will be out of style."

Dogs and trees made up the next batch of entries, and J.M. Timko of Vicksburg, Mich., contributed this example: "Are you sure this is where the dog buried my iPod?"

The philatelic line winner is Steve Kotler from San Francisco, Calif., who sent in this groaner: "Well, we finally got our very own post office branch."

On the nonphilatelic side, the winner's crown goes to R. Heinen from Shrewsbury, Mass., who has the characters thinking well into the future, as shown in Figure 3.

"Jack, I think we should have taken the magic beans instead of the money tree," from Stephen Banks of Sacramento, Calif.

"This is a tree-mendous day!" by James Williams of St. Petersburg, Fla.

"I can't understand it. This is where the rainbow ended and still no pot of gold," sent by David Vikan from West Fargo, N.D.

"Only two more trees to go. We have to stop making fun of dad's stamp collection!" from Chris Faure of Averill Park, N.Y.

"How can this be Arbor Day when there's no water and no boats?" by Michael Intenzo of Philadelphia, Pa.

The next cartoon caption contest will be announced in the Jan. 5, 2009 Linn's.