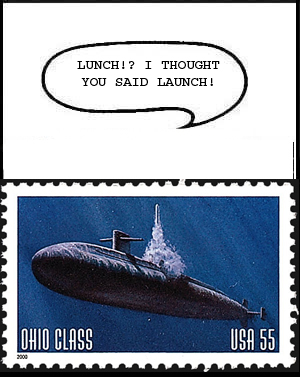 Mark Leon and William Seemann offered nearly identical nonphilatelic line winners for the for the December 2009. The next contest will be in Linn's by February 1, 2010 issue.

The cartoon caption contest stamp for December 2009 was the 55¢ Ohio Class Submarine stamp issued in 2000, shown in Figure 3.

The majority of the entries commented on the presence of an ocean full of water, and the continuing problems with soaking U.S. stamps.

A good representative of this comes from Roger Malcolm of Kewanee, Ill.: "Captain, I have good news: We've fixed the leak with self-adhesive stamps. They'll never come off!"

Another approach was characterized by L. Seaburg of Seattle, Wash.: "Put the stamps in the torpedo tube – the salt water will loosen them better than fresh water."

Pokes at the Postal Service were frequent among the entries. Most focused on rate increases, but Bradley Miller of Huntsville, Ala., gives pause with "Dang it, Mr. Potter, that's another early release!"

On the philatelic side of the contest, Mildred Barylski of Alexandria, Va., takes the brass ring with "I've heard of airmail rate and surface rate – is this a subsurface rate?"

The winner on the nonphilatelic side is shared by Mark Leon of Las Vegas, Nev., and William Seemann of Mesa, Ariz., who both offered virtually the same line, shown in Figure 3.

The three winners will receive Linn's Stamp Identifierpublished by Amos Hobby Publishing, or a 13-week subscription to Linn's (a new subscription or an extension). The book has a retail value of $12.99. Here are a few of the runners-up:

"Did you know that this periscope makes a great stamp magnifier?" by Richard Smith of Wilmington, Del.

"Dive! Dive! – into the world or stamp collecting!" by Jerry Sheffield from Lavalette, W.Va.

"Do you think Santa will be able to find us down here?" from Ira Cotton of Omaha, Neb.

The next cartoon caption contest will be announced in the Feb. 1, Linn's.