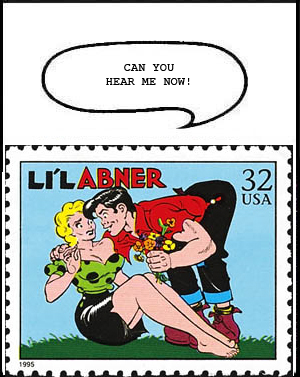 Douglas Phillips of Sierra Vista, Ariz., sent in this winning entry for the January cartoon caption contest. The next contest will appear in Linn's April 6, 2009 issue.

The scene depicted on the 32¢ Li'l Abner stamp (Figure 3) from the 1995 Comic Strip Classics pane of 20 allowed for many approaches to humorous lines.

A favorite was in the form of the classic invitation of an amorous male: "Daisy, if you give me a little kiss, I'll let you see my stamp collection," sent in by John Somol of Cary, N.C.

Many entries focused on the expected role of women at the time that Li'l Abner was in its heyday. Tim Liljeberg of Brooklyn Park, Minn., put it this way: "Marry me, Daisy, and you'll get all your rights. The right pot, the right pan, the right mop, the right washboard . . ."

Many readers wanted Daisy to reel in the largely clueless Abner. This was nicely captured by Jack Simon of Rego Park, N.Y.: "Li'l Abner, I'm going to speak to Mr. Capp about getting us married. OK?"

The nonphilatelic line winner, shown in Figure 3, transplants a question from a present-day television advertisement. It was sent in by Douglas Phillips of Sierra Vista, Ariz.

On the philatelic side, John Chapman of McHenry, Ill., sent in the winning entry: "Durn it, Daisy! When I gets this close to ya I gets so unhinged I can't hardly talk."

"These flowers are for helpin' me sort and soak that big kiloware lot . . ." by William MacQuarrie of Omaha, Neb.

"Are you or are you not going to the stamp show with me?" sent by Lawrence Segel of Valhalla, N.Y.

"I'd like to check you for ticks!" from Jo An Watson of Kalamazoo, Mich.

"My, what big beautiful eyes you have!" sent by Lowell Harris of Roseville, Calif.

"Abner, you smell like another woman. Have you been on the other corner visiting Brenda Starr?" from Michael Moticha of Apple Valley, Calif.

The next cartoon caption contest will be announced in the April 6 Linn's.