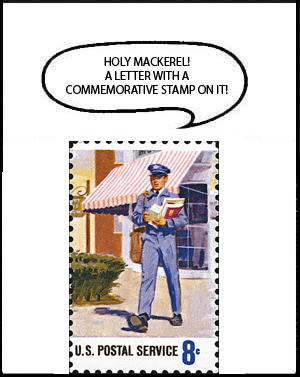 William Robert Haslett of California won the philatelic section of the July cartoon caption contest with this entry that comments on the 8¢ Mailman stamp of 1973. The next contest will be in Linn's by September 7 issue.

The financial condition of the Postal Service seemed to prompt many of the entrants in the July cartoon caption contest. For the contest, I asked to have the mailman reflect upon what might happen in the future — especially if the financial losses continue.

This 8¢ Mailman stamp, shown in Figure 4, is from the 1973 Postal Service Employees stamp issue.

Steve Kotler of San Francisco, Calif., posits the possibility of dire consequences with this entry: "The Smithsonian wants to know if I want to donate my uniform?"

Jack Oakes of Las Vegas, Nev., represents another large group of entries by having the postman muse about his own contribution to the reduction in mail, though it seems the postman does not make the connection between his activities and the way those behaviors make his job less certain. Oakes' entry was, "As soon as I get this mail delivered, I can get home and catch up on my e-mail!"

Speeding up the coverage of the route interested many entrants. This example from Boyd Degeest, of Winona, Minn., is typical: "Wish I had a pair of roller blades!"

The philatelic line winner shown in Figure 4 reflects on the fact that commemorative stamps seem to be scarce in the mails. It comes from William Robert Haslett of San Diego, Calif.

On the nonphilatelic side — not an easy topic as the subject is a mailman – the winner is Donna Smith of Wilmington, Del., whose postman is saying: "Now I don't even have my backup job as a Maytag repairman!"

"What me worry? I work for the USPS. I'll be walking this route forever," from Bradley Miller of Huntsville, Ala.

"She always has a big smile for me when I deliver her Linn's each week." sent by Bertha Beer from Philadelphia, Pa.

"I didn't think the stimulus package would be this heavy!" from Norbert Heckler of Fort Myers, Fla.

"Neither twitter nor tweets stays this courier from the swift completion of his appointed rounds," from Elaine Frankowski of Minneapolis, Minn.

The next cartoon caption contest will be announced in the Sept. 7 Linn's.