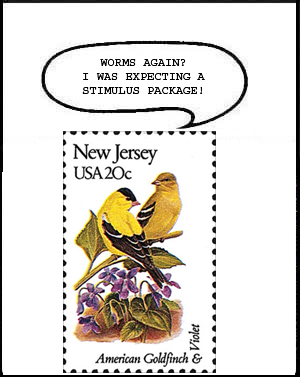 John Burns of San Antonio, Texas, sent in this winning entry for the March cartoon caption contest. The featured 20¢ New Jersey stamp from 1982, with goldfinches commenting on today's economy. The next contest will be in Linn's by May 4.

New Jersey's goldfinches are celebrated on the 20¢ stamp shown in Figure 3, from the popular State Birds and Flowers sheet issued in 1982.

Several U.S Notes readers who entered the March cartoon caption contest played off the reputation of New Jersey in constructing their lines for the goldfinches and I would like to share a couple of them:

"Listen birdbrain, with the highest property taxes in the country, we're not building a nest in New Jersey!" from Terry Garwood of Glassboro, N.J.

George DeKornfeld of Millerton, N.Y., who has obviously traveled the New Jersey Turnpike, sent in: "Yeah? You're from Joisey? What exit?!"

The United States' current economic woes led many entrants to think about what effects it could have on our fine feathered friends.

The first entry to treat this subject said, "If the recession gets any worse, our name is going to be changed to copper finches!" sent in by David Vikan of West Fargo, N.D.

Joseph Timko of Vicksburg, Mich., represents another group of entries, commenting on the newly established annual postal event: "It's that time of year, April showers bring May rate increases!"

For the philatelic line winner, Peter Diamond of Norfolk, Mass., presumes that one of the finches knows of the 1918 24¢ Jenny Invert airmail stamp error (United States Scott C3a), as he suggests, "Let's hang upside down, and give this stamp some real value!"

On the nonphilatelic side, John Burns of San Antonio, Texas, takes the prize with the line shown in Figure 3.

"I don't sing on the first date!" from Michael Moticha of Apple Valley, Calif.

"Nine hundred dollars an ounce for gold! Are we undervalued or what?" sent in by Leon Leszcznski of Sierra Vista, Ariz.

"What do you mean you just pecked a hole in the Hindenburg?" from Tim Liljeberg of Brooklyn Park, Minn.

"My agent told me we're too cute to audition for that Hitchcock movie!" by Donna Smith of Wilmington, Del.

"I don't care if it does have a river view, we're not taking the nest by the airport!" sent from Stanley Alsis of Feeding Hills, Mass.

The next cartoon caption contest will be announced in the May 4 Linn's.